Operations and teaching are online. Current and prospective students: please visit our COVID-19 Updates pages. Faculty and staff are available via email.
Submitted on March 13, 2013 - 1:00am 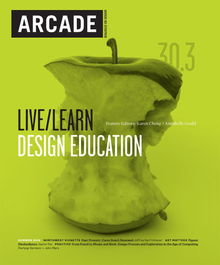 Visual Communication Design Associate Professors Karen Cheng and Annabelle Gould recently co-designed and co-edited ARCADE 30.3. This was the summer 2012 issue of a quarterly magazine published by the Northwest Architectural League, which is a non-profit educational organization. The theme for the issue was Live/Learn Design Education. The launch party was on Friday, 08 June 2012. All the articles were posted online over a two-month period, and printed copies may still be available at several venues. In addition to designing and editing, Cheng wrote an article titled “How to Survive Critique: A Guide to Giving and Receiving Feedback,” and Gould wrote an article titled “What We Don’t Teach–but Should.” Industrial Design Assistant Professor Magnus Feil contributed an article titled “Push Pull Twist.” Brian Boram (BFA 1987) provided an article titled “Agents of Change: Design Thinking for K-12.” Photos of the issue, shot by Division of Design student Sam Cook, have been posted on the ARCADE Facebook page.

In related news, Gould has been appointed as a member of the Steering Committee for the AIGA Design Educators Community.