We look forward to safely returning to in-person instruction and activities this autumn quarter. Current and prospective students please visit our COVID-19 Updates pages.
Submitted on July 30, 2014 - 1:00am 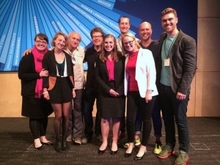 Interaction Design Professor Axel Roesler and his students continue to be invited to the annual Microsoft Research Faculty Summit and Design Expo. Held on July 14th and 15th this year, the event brought together faculty and students from nine institutions in the United States, Brazil, Israel, Denmark, and the United Kingdom, as well as numerous researchers from other organizations. The students who accompanied Roesler initially developed their project in the Winter Quarter 2014 course Design 483—Advanced Projects in Interaction Design. Of the six projects originating from that class, Vive was chosen for presentation at the Design Expo.

This is the eighth year that the Division of Design’s Interaction Design Program has participated in this Microsoft Research event. Read about the 2013 Design Expo here.