Design Beyond the Classroom 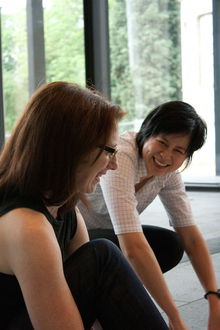 UPDATE: The Royalty Research Fund project led by Professors Karen Cheng and Kristine Matthews has progressed well. UW News published an article about the project, with links to video and an image gallery, on April 20, 2016

Aside from teaching, faculty at the UW and in the School of Art + Art History + Design engage with their own practice through research and other activities beyond the classroom. Division of Design Professors Karen Cheng and Kristine Matthews are often active with such projects. Early in 2015, they applied for a UW Royalty Research Fund Grant. They learned in June that they received full funding ($39,412) for their project titled “Interaction Design for Waste Minimization.” This collaborative project also involves UW faculty, staff, and students from the Master of Human-Computer Interaction and Design Program, the Department of Anthropology, the Garbology Project, Recycling and Solid Waste, as well as our Division of Design students.  The team will design, fabricate, and test a prototype of an interactive waste system that encourages individuals to compost and recycle their trash. The system will be installed in PACCAR Hall at the end of this year. Testing will take place during winter quarter 2016.

Cheng and Matthews have each had additional projects and recognition so far this year: