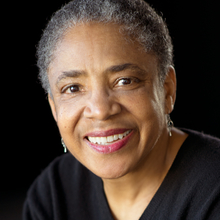 Barbara Earl Thomas (BFA 1973, MFA 1977) has been a well-known artist, writer, and arts administrator in the Seattle area for a long time, but 2016 appears to be her year for special recognition. In early May, Artist Trust announced that Thomas was the recipient of this year's Irving and Yvonne Twining Humber Award. This is one of the more significant local awards for an artist.

It was revealed later in May that she is one of the 2016 Strange Genius Award nominees in the visual art category. An event on September 24 at the Moore Theatre will be a celebration for all the nominees as well as the venue for announcing the winners.

A 30-year survey of her paintings, prints, and newer works in glass, paper cuts, and installation opens at the Bainbridge Island Museum of Art on June 25. The exhibition, titled Heaven on Fire, will remain up through October 2, 2016.

Update on September 1, 2016:
The Washington State 2016 Governor's Arts & Heritage Awards honorees were announced today. Thomas was selected for the individual arts award and will be recognized with other honorees at a dinner on November 15.

Update on September 26, 2016:
At the Stranger Genius Awards on September 24, Thomas was announced as the winner in the art category.

Update on October 31, 2016:
Seattle Magazine published Seattle's Hall of Fame as part of their 50th anniversary celebration. Thomas was on the list in the arts and culture category.