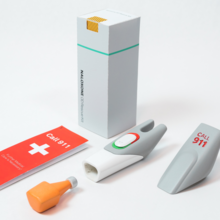 During spring quarter 2015, Miles Miller and Christoffer Hart partnered on a capstone project through DESIGN 447, Senior Projects in Industrial Design (taught by Matthew Marzynski), and DESIGN 484, Senior Projects in Interaction Design (taught by Professor Axel Roesler). The end result was the concept for the Naloxone OD Rescue Kit, which was a response to the growing number of heroin and opioid prescription overdoses. The kit was designed for emergency use, with a pressurized nasal spray and clear instructions.

Both Miller and Hart received their BDes degrees in 2015; Miller focused on Industrial Design and Hart on Interaction Design. After graduation, they submitted the Naloxone OD Rescue Kit to the IDSA competition for the International Design Excellence Awards (IDEA). During summer 2016, they learned that their kit was selected as a Top Winner and was included in the People's Choice Award competition (one of only three student-generated projects among the seventy-three). At the IDEA 2016 Ceremony on August 17, which took place at the IDSA International Conference in Detroit, it was announced that the Naloxone OD Rescue Kit was among the Silver category winners. Congratulations to Miles Miller and Christoffer Hart!