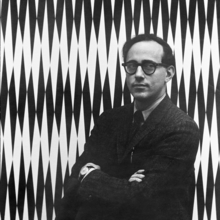 Professor Emeritus Francis Celentano passed away on November 20, 2016. Born in the Bronx in 1928, he studied both art and art history as an undergraduate and graduate student at New York University. He joined the faculty at the UW in 1966 and retired from teaching in 1993 to fully dedicate his time and attention to painting in his Seattle studio. In addition to a large mural commissioned for SeaTac airport, Celentano’s work is included in such collections as the Stedelijk Museum in Amsterdam; the Museum of Modern Art and the Whitney Museum in New York; the Albright-Knox Art Gallery in Buffalo; and the Museo de Arts Contemporaneo de Buenos Aires.

From his artist statement:

For me, so called Op Art or better Perceptual Art functions as a metaphor for the distortions of perception, experience and reason generously provided by nature and culture.

A memorial gathering is planned for the afternoon of January 28, 2017, in the Jacob Lawrence Gallery. Please RSVP.

His widow, Rebecca Celentano, asks that, in lieu of flowers, donations be directed to support School of Art + Art History + Design students studying at the UW Rome Center. Give now.

An obituary for Francis Celentano was published in the Seattle Times yesterday. It also may be read online.