Quackers is a Hit

Operations and teaching are online. Current and prospective students: please visit our COVID-19 Updates pages. Faculty and staff are available via email.
Submitted on November 3, 2017 - 10:59am 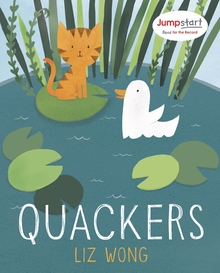 Liz Wong received her Ceramics BFA in 1997 along with a BA in Anthropology. Over the years, she has worked at the Henry Art Gallery and in the UW Arts Ticket Office. Wong has also been pursuing freelance illustration work since 2007. Her first children's book, Quackers, was published in 2016 by Knopf Books for Young Readers, an imprint of Penguin Random House.

The book, about a cat who thinks he is a duck, has become quite popular. It is a finalist for the Washington Children's Choice Picture Book Award sponsored by the Washington Library Association. It also was a finalist for the Washington State Book Awards in the Books for Young Readers category. Quackers received even wider notice by being chosen as the one book for Jumpstart's 12th Read for the Record event on October 19, which took place in all 50 states and over 60 countries.

Wong has this to say about how her experience at the School helped shape her career:

One of the great things I valued about my time at the School of Art was the spirit of experimentation. Even though I was majoring in Ceramics, our professors gave us the flexibility to work with any materials we wanted and the time and space to just create. After I graduated, I tried out many different pathways to a career in the arts until I found the right fit for me. That openness fostered a sense of curiosity, creativity, and a desire to continue learning long after I earned my degree.