Operations and teaching are online. Current and prospective students: please visit our COVID-19 Updates pages. Faculty and staff are available via email.
Submitted on March 6, 2018 - 10:42am 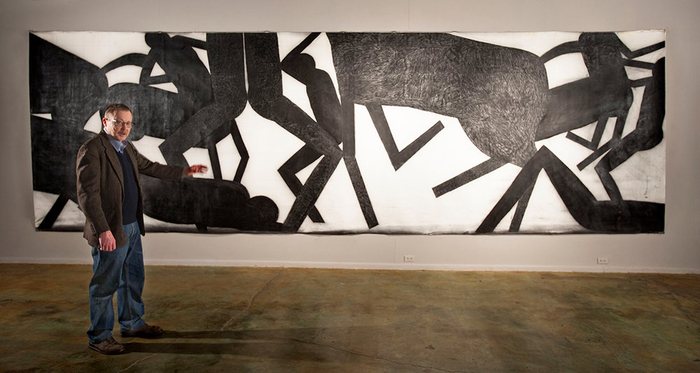 Michael Spafford with one of his artworks

Professor Emeritus of Painting Michael C. Spafford is being honored with an exhibition opening at Seattle galleries in early April followed the next day by a book launch taking place in the Art Building.

This 88-page monograph titled Michael C. Spafford: Epic Works accompanies the similarly titled exhibition. It is published by Lucia/Marquand and distributed by UW Press. The hardbound book includes a forward by writer and curator Bruce Guenther (Curator of Modern and Contemporary Art in Seattle, Chicago, Orange County, and Portland) and descriptive background on the relevant myths. Drawn from works in the exhibition, it also functions as a catalog.

The exhibition is presented as a complete body of work spread over three Seattle galleries with each locale offering different mythologies or medium. Exhibiting a large segment of these works gives the public a rare opportunity to glimpse the scope and depth of the artist's vision.

Michael C. Spafford was born in Palm Springs and grew up in Southern California. He received his BA at Pomona College in Claremont, CA, and his MA from Harvard University, Cambridge, MA. He moved with his wife, artist Elizabeth Sandvig, to Mexico City in 1960, where he lived and worked before accepting a position to teach art and art history at the University of Washington in 1963. Professor Emeritus since 1994, he is an active and influential member of the Seattle arts community. Spafford showed with Francine Seders Gallery from 1966 until the gallery closed in 2013. He continues to paint and exhibit.

The artist has a unique, monumental style that is a synthesis of powerful imagery and formal invention, distilling the action of mythological narrative. Spafford has used Greco-Roman mythology as the catalyst for a body of work spanning 60 years. He returns to certain epics tales, including The Labors of Hercules, The Iliad, and The Odyssey, reworking multiple versions in various formats.

Spafford's honors and awards include a Louis Comfort Tiffany Foundation Grant in 1966 and Rome Prize Fellowships in 1967 and 1968; a King County Arts Commission's Honors Award, 1979; an Art Award from the American Academy and Institute of Arts and Letters, 1983; and the first Neddy Artist Fellowship from The Behnke Foundation in 1996. In 2005, he was invited to be Artist-In-Residence at Dartmouth College which included a major exhibition of recent paintings. He was honored with Lifetime Contribution to Northwest Art Award (shared with wife Elizabeth Sandvig) in 2017. His work is included in the collection of Seattle Art Museum, WA; Tacoma Art Museum, WA; Mexican-North American Cultural Institute, Mexico; Museum of Modern Art, Dallas, TX; Cheney Cowles Museum, Spokane, WA; Hallie Ford Museum of Art, Willamette University, Salem, OR; Jundt Art Museum, Gonzaga University, Spokane, WA; and Museum of Art, Washington State University, Pullman.