Operations and teaching are online. Current and prospective students: please visit our COVID-19 Updates pages. Faculty and staff are available via email.
Submitted on June 22, 2018 - 2:38pm 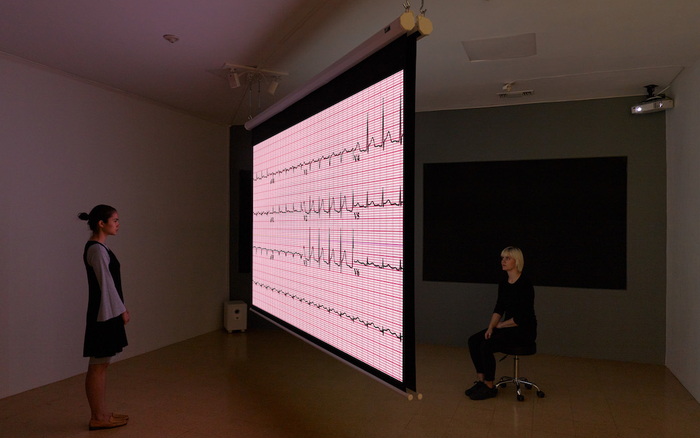 The Jacob Lawrence Gallery is pleased to present an exhibition of work by Kerry Tribe, including Standardized Patient, her recent work commissioned by the San Francisco Museum of Modern Art (SF MoMA). Standardized Patient offers insight into the work of Standardized Patients or "SPs," professional actors trained to portray medical patients in simulated clinical encounters. When working with medical students, SPs remain in character and manifest specific symptoms while simultaneously evaluating their doctors-in-training for constructive feedback and grading. Developed in close collaboration with professional clinicians, communication experts, and SPs working at Stanford Medical School and the University of Southern California, Standardized Patient continues Tribe's ongoing inquiry into the life sciences and medicine while raising questions around performance, communication, and empathy.

As with earlier works like H.M., 2009, and Aphasia Poetry Club, 2015, the internal structures of its narrative development and the physical conditions of the Standardized Patient installation mirror the social and cognitive conditions of its subjects. The installation's central projection screen presents a progression of medical students meeting with their SPs on one side, while, on the other, there is a synchronized montage of supporting materials offering glimpses of the scripts, snapshots, and diagnostic flow charts that inform each party's perspective. Standardized Patient will be shown alongside a series of twelve letterpress prints produced for Standardized Patient as well as process pieces related to Exquisite Corpse, Tribe’s 51-minute film on the L.A. River, which will be screened during the exhibition’s run.

This exhibition is supported by the Wyckoff Milliman fund.

Please join us for a special outdoor screening of Kerry Tribe's Exquisite Corpse in Occidental Square in conjunction with the Seattle Art Fair. There will be an introduction to the film by Kerry Tribe and a Q+A following the screening.

This 51-minute film traces the 51-mile LA River from its origin in the San Fernando Valley to its terminus at the Pacific Ocean. Along the way, Tribe's camera captures its varied landscapes, neighborhoods, creatures, and communities through a string of meditative encounters that collectively describe the river at this juncture in its history.

The Jacob Lawrence Gallery has a related video work, =, along with Tribe’s large-scale, map-based "script" for Exquisite Corpse on view as part of the exhibition Kerry Tribe: Standardized Patient.

Kerry Tribe was born in 1973 in Boston, MA, and lives and works in Los Angeles. Her work has been the subject of solo exhibitions at the San Francisco Museum of Modern Art; 356 Mission, Los Angeles; the Institute of Modern Art, Brisbane; the Power Plant, Toronto; Modern Art, Oxford; and Camden Arts Centre, London. It has been included in significant group exhibitions at the Museum of Modern Art (MoMA), New York; the Hammer Museum, Los Angeles; the Whitney Museum of American Art, New York; and the Hirshhorn Museum and Sculpture Garden, Washington, DC. The recipient of a Herb Alpert Award, a Creative Capital Grant, and a USA Artists Award, Tribe’s work is in the public collections of MoMA, the Whitney, the Hammer, and the Generali Foundation, among others.