Sonny Assu: Études for the Settler 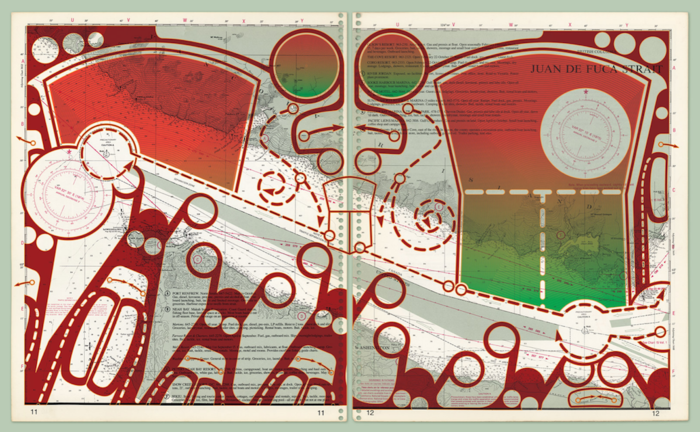 This exhibition brings together a new body of work by Sonny Assu, Territorial Acknowledgements, alongside his prior series that problematize colonial conceptions of the landscape: The Paradise Syndrome (2017), 1UP (2016), and Interventions On The Imaginary (2014). Through these works, Assu offers corrective visions of colonized landscapes.

A series on found, thrift-shop landscape paintings, Territorial Acknowledgements layers Indigenous land-based mark-making in red ochre (referencing petroglyphs) onto images of the North American landscape in the style of the Group of Seven or the Hudson River School. Alluding to the falsities of Manifest Destiny, Assu reinserts an Indigenous presence into the depictions of landscapes from which they have been violently removed. As Assu asserts,

Whether it is a Group of Seven member or a humble Sunday-painter, I see my ancestors being white-washed out of these landscapes, presenting only the colonial gaze and the settler narrative… Leaving a void of a T'łakwa (Copper), I'm connecting the viewer to the selective wealth of the stolen land. The white ovoids, s-shapes, u-shapes, and other Kwakwaka'wakw inspired marks place an Indigenous presence back into the collective memory of those who chose to benefit/profit from the erasure of our presence.

The Paradise Syndrome series similarly presents two understandings of a landscape simultaneously: an Indigenous way of thinking about and navigating the land and water once reigned over by the the Ligwilda'xw, the Kwakwaka'wakw, and the other Pacific coastal First Nations as well as navigation books that present a colonialist way of demarcating the landscape though invisible borders.

1UP is a video projection originally created as a mural for Surrey Art Gallery's Urban Screen. The title of the work references video games, 1UPs acting to extend the game time and providing the opportunity for greater achievements and the accumulation of more points. Assu writes, "Addressing my thoughts on decolonization, the large foreground shape invokes notions of graffiti, 'tagging' the colonial landscape to become a metaphor to speak to the resurgence for Indigenous rights and title."

The series of paintings Interventions On The Imaginary 'marks' images of the Northwest landscape with ovoids, s-shapes, and u-shapes, challenging the colonialist fantasy of terra nullius, or 'nobody’s land,' and contesting the removal of an Indigenous presence from the landscape. As Assu writes, the series "is a clear reference to Marcia Crosby's essay, 'The Construction of the Imaginary Indian,' and situates itself within the realm of remix culture — as digital interventions onto works that contain the colonial gaze… The landscapes become marked by the spectre of Native presence, and the Northwest Coast design elements, traditionally two-dimensional in appearance, acquire the illusion of depth through association with Western principles of perspective. I see these bold interruptions of the landscapes as acts of resistance towards the colonial subjugation of the First People."

Sonny Assu: Études for the Settler is organized in partnership with yəhaw̓, an exhibition celebrating Indigenous art made in the Pacific Northwest. The yəhaw̓ exhibition opens at Seattle's King Street Station in early 2019.

Sonny Assu (Ligwilda'xw of the Kwakwaka'wakw Nations) (b. 1975) was raised in North Delta, British Columbia, over 250 km away from his ancestral home on Vancouver Island. Having been raised as your everyday, average suburbanite, it was not until he was eight years old that he discovered his Ligwilda'xw / Kwakwaka'wakw heritage. Later in life, this discovery would be the conceptual focal point that helped launch his unique art practice. Assu graduated from Emily Carr University in 2002 and was the recipient of their distinguished alumni award in 2006. He received the BC Creative Achievement Award in First Nations Art in 2011 and was thrice long-listed for the Sobey Art Award. He completed his MFA at Concordia University in 2017. His work has been accepted into the National Gallery of Canada, Seattle Art Museum, Vancouver Art Gallery, Museum of Anthropology at University of British Columbia, Burke Museum at the University of Washington, Art Gallery of Greater Victoria, Hydro Quebec, Lotto Quebec, and is included in various other public and private collections across Canada, the United States, and the United Kingdom. A monograph of his work, Sonny Assu: A Selective History, was published by the University of Washington Press earlier this year.

Études is a series of exhibitions named after the short form musical pieces, often for piano, focusing on the technical aspects of a particular technique. Études serves as a flexible platform for the exploration of methodology in contemporary art practices. The series of exhibitions at the Jacob Lawrence Gallery pays homage to Ligeti’s 18 études for piano, which were broken into three books, with the titles for each étude bringing poetic terms alongside technical ones.