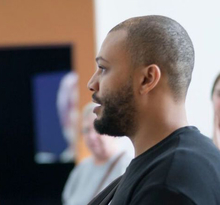 The Jacob Lawrence Gallery is pleased to announce Danny Giles as the 2019 Jacob Lawrence Legacy Resident. Giles is a Chicago-based artist who makes work that often brings together live performance, video, and sculpture to address the dilemmas of representing and performing identity as well as to interrogate histories of oppression and creative resistance. He received his BFA from The School of the Art Institute of Chicago in 2011, his MFA from Northwestern University in 2013, and he attended the Skowhegan School of Painting & Sculpture in 2013. Giles' work has been exhibited, performed, and screened at The Luminary, St. Louis; Museum of Contemporary Art Chicago; El Museo Tamayo, Mexico City; and Contemporary Arts Museum Houston. He is currently a 2018–2019 BOLT Artist-in-Residence at the Chicago Artists Coalition. Giles is part-time faculty at the School of the Art Institute of Chicago and Academic Director of the Ox-Bow School of Art & Artists' Residency in Saugatuck, Michigan.

The Jacob Lawrence Gallery is raising funds to support the 2019 Jacob Lawrence Legacy Residency and its associated exhibition. A gift of $30 or more will include a ticket to the Gallery's 25th anniversary celebration in February 2019. The Gallery was named in honor of Jacob Lawrence in 1994 after he spent more than a decade teaching at the University of Washington and having a significant impact on students.

Established in 2015, the Jacob Lawrence Legacy Residency and Exhibition has become the cornerstone of the Gallery’s program, enabling artists, students, faculty, and staff to engage in dialogue as new work is incubated. Black artists at all stages of their careers are nominated by a selection committee to travel to Seattle for a residency during the month of January and an exhibition in February. Previous Jacob Lawrence Legacy Residency awardees are HOWDOYOUSAYYAMINAFRICAN?, Steffani Jemison, and C. Davida Ingram.