Operations and teaching are online. Current and prospective students: please visit our COVID-19 Updates pages. Faculty and staff are available via email.
Submitted on March 7, 2019 - 10:00am 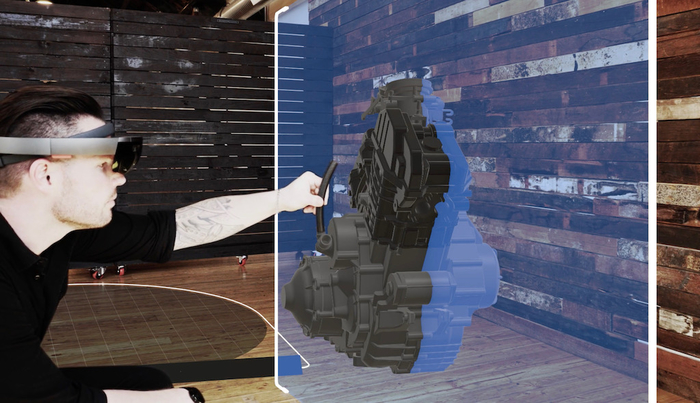 AR/VR marks a new frontier in the visualization and experience of three-dimensional (3D) content. Commercially available head-mounted displays such as Microsoft’s HoloLens and Oculus Go make advanced 3D displays available to the general public so that we can now imagine displays without borders, screens that are not constrained by rectangular frames, three-dimensional holograms that serve as augmented visual structure and novel interaction elements, and, ultimately, a mixed reality that integrates virtual elements into physical environments.

What are the new immersive experiences that designers, artists, and technologists are currently creating that will transform head mounted displays into the line of sight interface of the future?

At the intersection between CSE and IxD, Untethered displays work that is currently being or has recently been developed by students of Principal Lecturer Barbara Mones (CSE) and Associate Professor Axel Roesler (IxD).

Mones and Roesler intend the exhibition to be viewed as an experiment in progress, as a display of work that is ongoing and captured as a snapshot that points to the future. David Hunt and Natalie Burke, both from Unity Technologies, serve as consultants on the VR Projects. VR Projects were supported in part by the UW Reality Lab Studio. Staff member Sophia Baker also receives support from the Reality Lab Studio.

"The Space Between Two Perceptions," 2019