Operations and teaching are online. Current and prospective students: please visit our COVID-19 Updates pages. Faculty and staff are available via email.
Submitted on April 23, 2019 - 11:20am 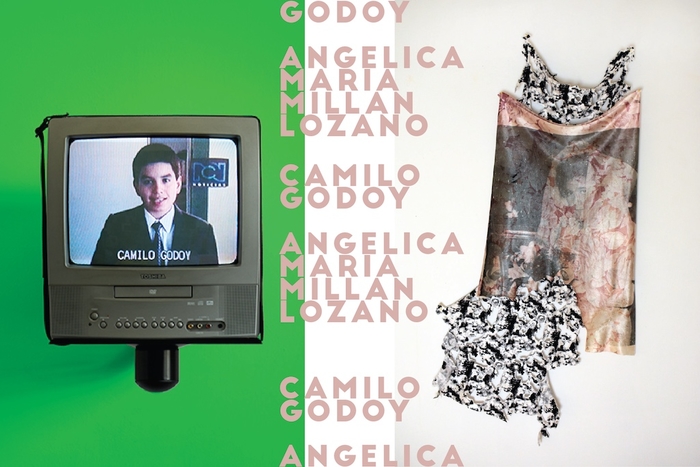 Lugar del Trabajo shares work by New York-based, Bogotá-born artists Angélica Maria Millán Lozano and Camilo Godoy. Through works that include photography, textiles, video, and works on paper, the artists question how we can represent the past and, moreover, how those representations bear on our contemporary situation. In doing so, the exhibition examines the politics of memory and the violence of forgetting. The works investigate history, gendered labors and rituals, news media, and archives as entry points for visitors.

Angélica Maria Millán Lozano (she/her/hers) (b. 1989, Bogotá) is an artist from Bogotá, Colombia, currently based in Queens, New York. She creates abstract and figurative compositions on distressed fabrics that question the social injustices that affect Latinas in the home. She received her MFA in Visual Studies at Pacific Northwest College of Art. Millán is also a co-founder at cvllejerx, a POC-focused fashion, poetry, and performance collaboration. Millán has presented work at Disjecta, Williamson | Knight, and Nationale in Portland, OR; Gas Gallery in Los Angeles, CA; and Bridge Productions in Seattle, WA.

Camilo Godoy (he/him/his) (b. 1989, Bogotá) is an artist whose practice is concerned with the construction of political meanings and histories. His work engages with conceptual, photographic, and choreographic strategies to negotiate questions that confront the politics of citizenship, imperialism, and sexuality. Godoy’s work analyzes and challenges past and present historical moments to imagine different subversive ways of being. He was born in Bogotá, Colombia, and is based in New York, United States. He is a graduate of The New School with a BFA from Parsons School of Design, 2012, and a BA from Eugene Lang College of Liberal Arts, 2013. Godoy was a 2017 Artist-in-Residence, International Studio & Curatorial Program (ISCP); 2015–2017 Artist-in-Residence, Movement Research; 2014 Keyholder Resident, Lower East Side Printshop; 2014 EMERGENYC Fellow; among others.

Juan Franco Ricardo (they/them) is a visual and performing artist, curator, and community organizer. Born in Bogotá (Muisca Territory) and currently based in Seattle (Coast Salish Territory), they ground creative practice in their queer, brown, immigrant identity and in solidarity across these communities.

As an artist, Franco Ricardo constructs image-based works with the aid of film and digital cameras, flatbed scanners, and found imagery while exploring the metaphors and histories of the chemical and digital process. As an organizer, they are Co-Founder and Co-Director of festival:festival, an annual, public, visual, and performing arts festival in Seattle. festival:festival presents and supports artists and cultural workers in Seattle.

Franco Ricardo holds an MA in Art History from the University of Washington and a BFA in Photography from Cornish College of the Arts.