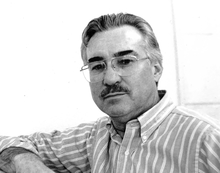 The School has learned that Professor Emeritus Kenneth Pawula passed away on June 29, 2019. He was 84 years old. Pawula was born in Chicago and received his master's degree from University of California at Berkeley in 1962. He began teaching at UW as an Instructor in 1965, and he became tenure-track faculty in 1967. Pawula was promoted to Associate Professor in 1974. He had one-man exhibitions in Seattle; New York; Minneapolis; Osaka, Japan; and Rio de Janiero, Brazil. His work is in the Seattle Art Museum, the Henry Art Gallery, and other collections.