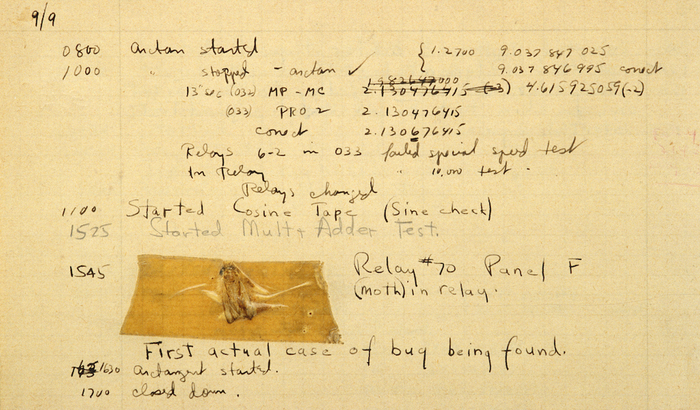 3D4M Assistant Professor Michael Swaine was awarded a University of Washington Royalty Research Fund Scholar grant in June 2018 for a project titled "Debugging." He went to Washington, DC, during the summer of 2019 to continue his research at the Smithsonian.

Swaine is interested in the notion of debugging in both culture and technology. He says:

This project develops from an interest in peoples' relationship with their mistakes. The etymology of the term "debugging" will be used as a conceptual guide, an inspiration, and also a concrete example. The story goes that the first computer bug ever found was in the MARK II (an early computer at Harvard in 1947). A moth was squashed between two relays and stopped the early computer from continuing to run its program. The moth was taped to the log book with a note, "first actual case of bug being found." Years later, the materials from the MARK II were given to the Smithsonian. "Debugging" will be a search for errors, with the moth as the central theme and main lens to view other collected stories of mishaps…

My project investigates whether such initiatives to understand bugs, to cluster and delineate them, to create genealogies of mistakes, can be put to new purposes. Instead of removing and discarding mistakes, the project will archive and highlight the mishap and its story. With the Smithsonian's permission, I will document where the bug is now kept. I will illustrate the importance of errors on our paths to discovery. To support my research, I will collect other examples of stumbled-upon mishaps, with the moth as the centerpiece.

Since his Smithsonian research, Swaine has been sorting through many hours of video in order to produce a final video document about the computer bug's resting place. He is also working towards the production of a letterpress newspaper that will have multiple stories about mistakes/errors, including some by invited writers.