Operations and teaching are online. Current and prospective students: please visit our COVID-19 Updates pages. Faculty and staff are available via email.
Submitted on January 7, 2020 - 10:38am 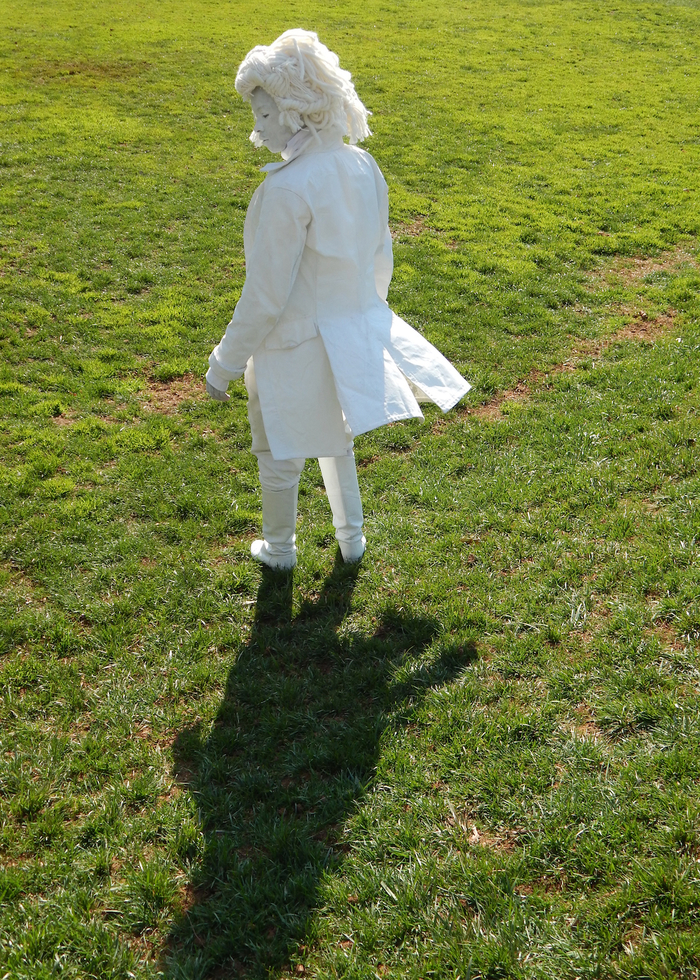 Marisa Williamson. Even ghosts have their ghosts. A shadow follows The Ghost of Thomas Jefferson. Charlottesville, VA, 2018. Photo by Gabriella Fuller.

Artist Talk: Friday, February 7, 6pm in rooms 227/229
Free and open to all; exhibition reception to follow.

Marisa Williamson, the 2020 Jacob Lawrence Legacy Resident at the Jacob Lawrence Gallery in the University of Washington School of Art + Art History + Design, presents newly commissioned work in the exhibition Angel of History.

In Walter Benjamin’s interpretation of the Paul Klee painting, Angelus Novus (New Angel) in his Theses on the Philosophy of History, he explains Klee’s angel as moving away from something he is fixedly contemplating. Since 2013, Williamson has been fixedly contemplating the life, work, choices, and legacy of Sally Hemings, enslaved mother of four of Thomas Jefferson’s children. This exhibition moves out from that extended contemplation, engaging with questions of monument and memory.

A monument, like a scale, is a tool for weighing and comparing the past to the present. A monument, like a screen or distant figure in profile, is projected onto and animated by the fantasies of others. A monument, once by definition immobile, site-specific, unchangeable, and inert, can now perhaps be a meme, a metaphor, a performance, a reenactment, a temporary intervention ⁠— mobile, roving, resistant to dominant histories and hegemonic modes of storytelling.

This exhibition endeavors to show the past, not necessarily "the way it really was" but, as Walter Benjamin describes, "…as it flashes up in a moment of danger." Angel of History looks backward. It awakens the dead in Seattle using a modular and collaborative strategy. Measuring progress, sometimes playfully, the work aims to provide insight not only into how history is understood but how it is felt.

During the month of February, Marisa Williamson will hold a concurrent exhibition, The Runaway, at SOIL Gallery opening on Thursday, February 6, from 6–8pm.

View the artist's lecture and her performance during the exhibition reception.

Marisa Willamson is a project-based artist who works in video, image-making, installation, and performance around themes of history, race, feminism, and technology. She has produced site-specific works at Thomas Jefferson’s Monticello (2013), Storm King Art Center (2016), the Metropolitan Museum of Art (2016), the University of Virginia (2018), SPACES Cleveland (2019), and by commission from Monument Lab, Philadelphia (2017) and the National Park Service (2019).