Operations and teaching are online. Current and prospective students: please visit our COVID-19 Updates pages. Faculty and staff are available via email.
Submitted on February 8, 2020 - 8:58am 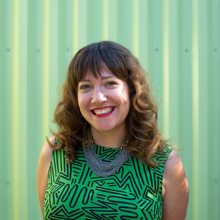 Expanded Internet Art is the first comprehensive art historical study of "expanded" internet art practices. Charting the rise of a multidisciplinary approach to online artistic practice in the past decade, the text discusses recent currents in contemporary artistic practice that parallel the explosion of the internet through advances such as social media, smart phones, and faster bandwidth. Internet art is no longer determined solely by its existence on the web; rather, contemporary artists are making more art about informational culture using various methods of both online and offline means. It asks how artists, such as Seth Price, Harm van den Dorpel, Kari Altmann, Artie Vierkant and Oliver Laric, create a critical language in response to the persuasive influence of informational capture on culture and expression, where the environment itself becomes reorganized to be more legible as information.

Ceci Moss is a curator, writer and educator based in Los Angeles, USA. She is the founder of Gas, a mobile, autonomous, experimental and networked platform for contemporary art. Her academic research addresses contemporary internet-based art practice and network culture. Her first book Expanded Internet Art: Twenty-First Century Artistic Practice and the Informational Milieu is released through the Bloomsbury series International Texts in Critical Media Aesthetics. Her writing has appeared in Rhizome, Art in America, ArtAsiaPacific, Artforum, The Wire, CURA, New Media & Society and various art catalogs. Previously, she was Assistant Curator of Visual Arts at Yerba Buena Center for the Arts, the Senior Editor of the art and technology non-profit arts organization Rhizome, and Special Projects Coordinator at the New Museum. She is currently a Visiting Lecturer in Critical Studies at the University of Southern California and she has held teaching positions at Scripps College, the San Francisco Art Institute and New York University.

"What does art do in an information-driven culture? Moreover, how does information-driven art enable us to take note of the changes in our culture? This book draws a line under competing theories of the place of art, post-internet, that have been jostling for space since pre-internet days, and reminds us – simply and urgently – that art can and does (or can even choose not to). Ceci Moss has written a clear-eyed conversational treatise that joins philosophies of technology and recent histories of information-driven art and her efforts will help any student or practitioner navigate our fluid media landscape. I've always wanted a book that brought Simondon, Lyotard, Laric, and LOL cats together, and now I've got one." – Sarah Cook, Curator and Professor of Museum Studies, University of Glasgow, UK