We look forward to safely returning to in-person instruction and activities this autumn quarter. Current and prospective students please visit our COVID-19 Updates pages.
Submitted on October 15, 2020 - 11:01am 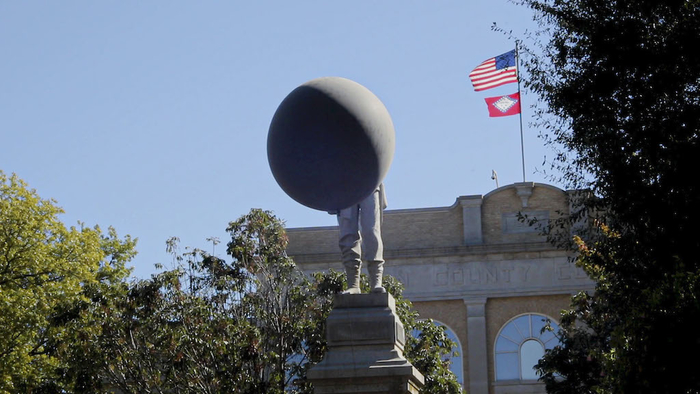 Ariel René Jackson was born and raised in Louisiana. She currently lives in Austin, Texas, where they completed their MFA at The University of Texas at Austin in 2019. Themes of loss and transformation are embedded in their interest and application of sculpture, video, and performance by way of performative and sculptural acts, utilizing repurposed imagery or objects. Jackson often collaborates with Michael J. Love, an interdisciplinary tap dancer and choreographer. Together they design and choreograph performances and films that consider history, time, and landscape. Jackson is an alum of the Skowhegan School of Painting and Sculpture (2019) and completed an exchange program at the Royal College of Art in 2018. Their work has been shown at various galleries and institutions such as the SculptureCenter (2019); CUE Art Foundation (2018); Contemporary Art Center, New Orleans (2018); DePaul Art Museum (2018); Studio Museum in Harlem (2016); and RISD Museum (2017).

Michael J. Love is an interdisciplinary tap dance artist whose research intermixes Black queer feminist theory and aesthetics with rigorous practice to engage in thinking on the Black cultural past and Black futurity. He is currently based in Austin, Texas, where his performance work has been supported and presented by Fusebox Festival, ARCOS Dance, and the Cohen New Works Festival. He has also curated live, interactive performance-based experiences for The Banton Museum of Art (Austin) and the Fusebox Festival Hub as a founding member of Block Party Collective. Love holds an MFA in Performance as Public Practice from The University of Texas at Austin and is an alumnus of Emerson College. Most recently, Love’s performance collaborations with transmedia artist Ariel René Jackson have been featured in New York Times Magazine’s #TBlackArtBlackLife Instagram series, screened at the New Museum (New York), SXSW (Austin), PARA Foundation (Berlin), Vox Populi (Philadelphia), and presented at CUE Art Foundation (New York), the George Washington Carver Museum (Austin), and the Visual Arts Center (Austin).

Established in 2015, the Jacob Lawrence Legacy Residency invites Black artists at all stages of their careers to have a residency during the month of January to develop new work and an exhibition during the month of February, Black History Month. Previous Jacob Lawrence Legacy Residency awardees are HOWDOYOUSAYYAMINAFRICAN?, Steffani Jemison, C. Davida Ingram, Danny Giles, and Marisa Williamson. Due to COVID-19, the residency will be hosted remotely this year.