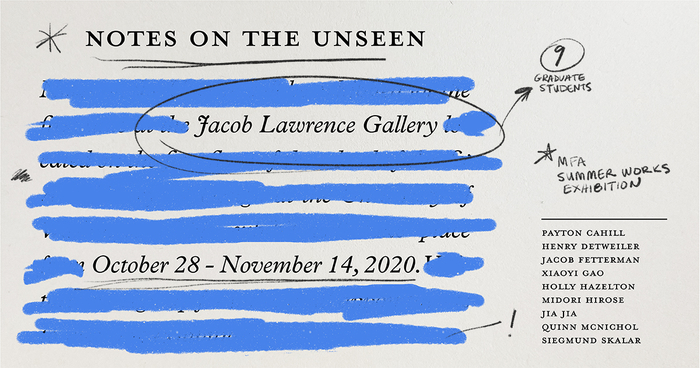 The Jacob Lawrence Gallery is pleased to present Notes on the Unseen: 2nd Year MFA Exhibition, featuring artwork by nine graduate students from the University of Washington School of Art + Art History + Design. Developed over the summer of 2020 by students in the Painting + Drawing, 3D4M, and Photo/Media programs, the works document neglected realities, repressed traumas, and invisible contagion in a variety of media, including installation, sculpture, painting, and moving images.

Through her work in glass and sculpture, Payton Cahill (3D4M) explores a fascination with the natural world. She believes nature has a process for everything that is created; understanding that process helps her to understand her own purpose in making. Cahill describes her work as alchemy, breathing life into something raw and elemental, transmuting it into something magical. Originally from Northern California, Cahill earned her Bachelor of Fine Arts from California State University, Chico, in 2018. Over the past nine years, she has worked at the Pilchuck Glass School and has contributed to notable projects such as a glass installation at University of Miami’s Medical Center. Her work has been exhibited throughout the West Coast.

Henry Detweiler (Photo/Media) uses installation, performance, and other modes of engagement in his art practice, drawing influence from theater, pop culture, and radical queer politics. His recent projects have combined prose and digitally altered photography to interrogate personal and cultural histories, the ethics of obfuscation, and the veracity of inherited narratives. Detweiler’s work has been featured in New American Paintings, Hyperallergic, and Emergency Index and his writing has been published in several online arts journals, including ArtsATL and BurnAway. He has artwork in the permanent collections of the City of Atlanta and the High Museum of Art, and he has previously served as Director for nonprofit arts organizations MINT in Atlanta and Institute 193 in Lexington, Kentucky. Born in Northwest Georgia to commercial artist parents, Detweiler studied painting and printmaking at Georgia State University in Atlanta.

Through a multi-disciplinary approach, Jake Fetterman (3D4M) questions the role of the facade in the queer experience, interrogating its necessity as a form of self-defense and as a mode of self-expression. A first-generation American with Eastern European heritage, they reference Western histories, mythologies, and aesthetics as a means to explore the politics of the queer body, its relationship to constructed space, and the ever-shifting nature of identity. Fetterman grew up in the Pacific Northwest, received their BFA from Western Washington University in 2015, and completed a post-baccalaureate program at Colorado University, Boulder in 2019.

Born and raised in Chengdu, China, Xiaoyi Gao (Painting + /Drawing) is influenced by the drastic social and economical change China has experienced since her childhood. She is drawn to the intimacy of antique objects and places forgotten in time, and her work is rooted in fragments of mundane life and personal experience, which she considers a gateway to inspecting the relationship between human beings and society. Focusing on the sense of belonging and loss, Gao attempts to measure the immeasurable — emotion and memory — turning intangible things into tangible ones, and vice versa, through various media, including painting, video, and sculpture. Gao earned her BFA from the University of Washington in 2018 and was an artist in residence at the School of Visual Arts in New York the following year. She has received a grant from Elizabeth Greenshields Foundation and her video work “Dollhouse” was featured on SVOX.TV in London.

Holly Hazelton (Painting + Drawing) makes graphically realistic paintings that focus on chronicling landscapes altered by humans, giving a visual voice to living things that cannot speak against the industrial encroachment of their space. Through the uses of layering, context, and mixed media techniques, Hazelton builds compositions that explore these powerful interactions and delights in the exacting and entrancing detail of the flora. Hazelton grew up in the idyllic, tree-filled, sprawling landscape of Iowa, which spurred connection to the land. She graduated in 2017 from Iowa State University with a Bachelor of Fine Arts in studio art and has exhibited work in numerous shows in both Iowa and Washington. She curated and hosted her first group show at Raygun Art Gallery in Cedar Rapids, Iowa, in 2018.

Based in Portland, Oregon, Midori Hirose (Photo/Media) has exhibited her work at the Museum of Contemporary Art Santa Barbara in California, The Lumber Room in Portland, and Disjecta Contemporary Art Center as part of the Portland Biennial. She has also shown internationally in group exhibitions at the Carian Project in Turkey, the East/West Project in Berlin, Germany, and the Newberg Gallery in Glasgow, Scotland. Hirose has performed at Performance Works NW and in several TBA Festivals at the Portland Institute for Contemporary Art. She has received grants and awards from the Regional Arts and Culture Foundation and the Ford Family Foundation.

Jia Jia (3D4M) reflects on everyday objects using antics, satire, and humor to imagine them anew. Her works in sculpture, video, and performance question how globalization and a technologically saturated society influence the ideology of the individual and how the individual behaves in a society filled with contradiction and stimulation. Born and raised in Taiyuan, China, Jia earned her BFA in Ceramics from China Central Academy of Fine Arts in 2016. She also studied as an exchange student in Alfred University’s Ceramics Department and was a resident with California State University, Long Beach. Having studied and worked between China and the United States, her artistic creation is influenced by the countries’ contrasting socialization.

Quinn McNichol (Painting+ Drawing) is an artist and an herbalist. In the studio, they call on Irish herbalism and mythology, folk songs and traditions as well as the history of painting, tarot, and embodiment practices to process their life experiences through painting, drawing, and collage. Their imagery is drawn from feelings, memories, and dreams. Recently they have been incorporating writing in their practice in the format of newspaper articles. McNichol grew up north of Philadelphia and studied at Pennsylvania College of Art & Design in Lancaster. After earning their BFA, they attended several programs and residencies: The Rome Art Program, Millersville University’s Emerging Artist in Residence program, Mount Gretna School of Art, Visual Arts at Chautauqua Institute, and the Vermont Studio Center. They often visited Alice Schwager, an art healer who lived in the woods and showed them how to explore and connect with the nature that surrounds us.

Artist and journalist Siegmund Skalar (Photo/Media) is interested in how structural inequalities and the means of production shape both institutions and their unique visual cultures. Born in Salzburg, Austria, he earned his BFA in Europe, where he studied at the Academy of Fine Arts Vienna and Filmakademie Baden-Wurttemberg. Skalar recently completed residencies at Cité des Arts Paris and RMIT Melbourne. He was awarded the 2019 Startstipendium by Austria’s federal chancellery.