Operations and teaching are online. Current and prospective students: please visit our COVID-19 Updates pages. Faculty and staff are available via email.
Submitted on January 9, 2021 - 6:39pm 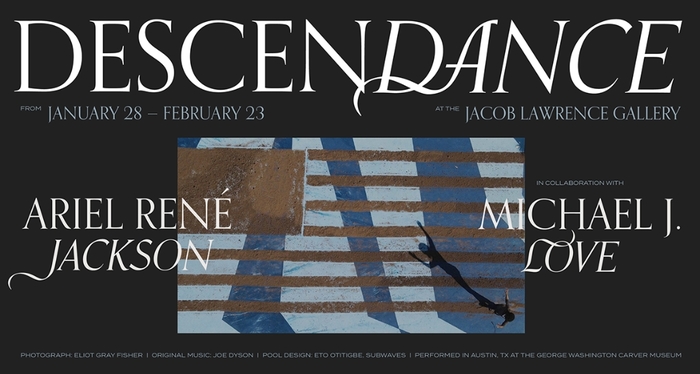 Thirty-minute, no-contact viewing appointments are now available for this exhibition. All visits require a completed health attestation form, and all visitors must wear masks. No more than two individuals are permitted per appointment. Check appointment availability.

“The piece was influenced by dance and movement, by history that lives in the body,” Jackson says. Over the course of Descendance, Jackson and Love organically change the flag as they move through it. “I’m interested in the action of developing culture.”

The piece builds on Carver's Message in Blue, an earlier project in which Jackson and Love altered a soil-made American flag in the Carver Center pool to a recording of George Washington Carver reciting his favorite poem, "Equipment." Jackson frequently works in video, but this is their first video without language or text.

Now in its sixth year, the Jacob Lawrence Legacy Residency supports new work by Black artists. Due to the pandemic, Jackson adapted their residency this year to function remotely, an adaptation they say allowed for new possibilities.

“It’s helpful for Black artists to receive this kind of support without having to travel and to really consider what our resources are. Ultimately, residencies are about building relationships,” Jackson says, pointing to the powerful opportunity to bring together Jacob Lawrence and George Washington Carver with this work. “One was a scientist and one was an artist,” they continue, “but Carver also made paint and paintings using soil.”

Jackson’s film-based multidisciplinary practice considers land and landscape as sites of internal representation. Through sculpture, video, and performance, they explore themes of loss and transformation. Exploring how culture is learned, Jackson modifies familial and antique farming, household, and educational tools and furniture, considering each object’s purpose before translation to a writing utensil, size expansion, or embedment within topsoil. Their recent work explores oral testaments and local histories, through repurposed meteorological tools and site-specific performances.

Fisher is an interdisciplinary artist working at the intersection of performance and technology. He has composed music and designed sound for film, theater, and dance, and has created documentary and animated shorts, built interactive installations, and written and directed several theatrical productions. As a director and core collaborator of interdisciplinary performance group ARCOS, he has presented work and won awards at festivals including Currents International New Media Festival, Online Performance Art Festival, and Edinburgh Fringe, created commissions at interdisciplinary symposia at Connecticut College’s Ammerman Center for Arts and Technology and Texas State University, served as a guest artist at institutions such as Colorado College and University of Texas at Austin, published peer-reviewed writing in Theatre Design and Technology, and participated in numerous residencies.

Otitigbe is a polymedia artist whose interdisciplinary practice investigates the intersections of race, power, and technology. With history as the foundation for exploration, Otitigbe sets alternative narratives into motion; creating spaces for people to experience a unique mixture of concepts.

About the George Washington Carver Museum

Located in Austin, Texas, the George Washington Carver Museum works to create a space where the global contributions of all Black people are celebrated through the preservation and exhibition of African American culture, history, and aesthetic expression. The museum is housed in a 36,000 square-foot facility that includes four galleries, a conference room, classroom, darkroom, dance studio, 134-seat theatre, and archival space. The galleries feature a core exhibit, The African American Presence in 19th Century Texas, a permanent exhibit on Austin African-American families, an Artists’ Gallery, and a children’s exhibit on African-American scientists and inventors.