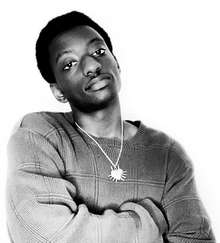 Ebrima Jassey received his Bachelor of Design degree in Visual Communication Design in June 2021. He was the Division of Design's undergraduate speaker for the School's virtual Graduation Celebration 2021. Below is the text of his speech.

To the faculty, guests and family, welcome. To my fellow graduates: congratulations. It’s a tough time to be graduating, but maybe it’s not all bad. Over the last year, so many people our age have moved back in with their parents that, by the next time you see your relatives at a family dinner, they’ll assume that’s why you’re at home and not because you have an art degree. I’m just kidding, that was a little personal.

All design projects start with research, so I studied the best graduation speeches, all given by people who never finished college, and Steve Jobs had one of my favorites where he talked about three stories. For the purposes of this speech I’ll be adapting this structure, instead talking about a few emails.

Before I continue, I want to define a term that I’ll be speaking about a lot throughout this speech. According to Merriam Webster,“resilience” is usually defined as “the ability to recover from or adjust easily to misfortune or change.” Remember that.

Without further ado, let’s get into email one, received at 2pm, on January 4, 2020. Subject line: Unsatisfactory progress in the Design major. Fun! It read:

Dear Ebrima,
I regret to inform you that you have failed to make satisfactory progress in the VCD major this past quarter.
Because you are now ineligible to continue in future design courses and the VCD major, you will need to meet with Judi Clark in the School of Art Advising office to discuss your options regarding a new course of study at the University of Washington.

At the beginning of 2020, I found myself expelled from the Design major. Clearly that wasn’t the end for me, but in order to understand how we got there, and how we got back here, we need to go back even further, to email number two.

Wait, a little further back. There we go.

I don’t think I need to read any further for the seniors or any student of this program. All potential design majors must first take a class called DESIGN 166, and earning a 3.7 or higher grants direct admission. They may also gain admission through a one day workshop offered during the summer.

I’m sure all seniors would agree that our time in DESIGN 166 foreshadowed the next three years of our design education. It was then that we learned to work through the night, hunched over screens and cardboard prototypes while pounding back coffee to stay awake. It was also the first time we experienced pin-up critique culture, a feedback model that at the time felt more like public humiliation than constructive criticism. We bought our first cutting mats, lost our first X-ACTO knives, received our first roasts, and purchased our first subscriptions to the Adobe Creative Suite, which is about to cost 52.99 next month.

Alright, pop quiz time: Do you remember that word that I asked you to remember? Well, there’s actually another definition. Originating in physics,“resilience” was first defined as “the capability of a strained body to recover its size and shape after deformation caused especially by compressive stress.” Sound familiar? It’s also worth mentioning that under the same laws, all bodies have an elastic limit, meaning there’s a limit to the amount of strain and stress they can take before they’re permanently damaged.

As grueling as 166 was for all of us, the process told us that resilience was key to becoming successful designers. And so, on September 26, 2018, 56 bodies shuffled into room 249 prepared to undergo three years worth of compressed stress and deformation in exchange for a design degree.

Sophomore year was fun. The compositions were colorful, the cubes were sexy, the research was methodical, and Adobe InDesign was terrifying. But it was tough. Late nights were swapped for all nighters, coffee was swapped for Yerba Mate, and we entered our 20s with the spines of 40 year olds.

It was at this point that I started to experience difficulties with classes. I had trouble sustaining attention for long periods of time, was always running late, and often forgot important dates and deadlines. I had trouble getting tasks started, often only able to begin once a deadline approached. I struggled to retain small but important details, an indispensable skill for a designer, and made small but frequent blunders that accumulated quickly. Group projects became nightmarish, and on numerous occasions my mistakes affected my teammates. It was only after a conversation with a friend and some research that I realized I probably had Attention Deficit Hyperactivity Disorder, or ADHD, and that I’d been combatting it my whole life. Unfortunately, getting diagnosed and treated proved difficult. Distraught and ashamed, I thought back to how I’d got here and figured the only thing to do was to put my head down and work harder. So I did, and that was how I arrived at email number one; exhausted and majorless. Tying it back to our definition of “resilience”: I had hit my elastic limit.

At this point, I decided that I needed to look back even before 166. I recalled a crisp autumn evening in 2017 when a woman named Joylyn approached me in a library and spent an hour telling me that I belonged in this thing called the UW Design program. I recalled visiting the Design Hallway and telling myself I’d one day grace those walls. I recalled all the support and encouragement I got from friends, mentors and academic advisors when I realized it would mean taking a fifth year in college. I recalled the cutting mat and extra cardboard Sami and Sabrina gave me during 166, and that on the final submission day, my friend Rheanna had photographed my cardboard prototype for me, giving me time to finish my storyboard and dash to the Art Building to submit. I recalled the time Joylyn spent combing over my application and pumping me up before the Design Workshop. And, most of all. I recalled the joy that I felt on June 18, 2018, and how good it felt to share the success with all of the people who helped me get there. While 166 was a taste of the tough times that were ahead, it was even more so a sampling of the many times that we would come to support and be supported by each other throughout our design education. I finally remembered that I had a whole community of people that were willing to help me, and that I didn’t need to be ashamed to ask for it.

This brings me to the final email, the one from Professor Matthews asking me to do this speech. As you all know now, I was long since knocked out of the running for valedictorian, so I wasn’t entirely sure how this had happened, but I found that I’d been nominated by my classmates. I wasn’t sure what my classmates were thinking at first, but once I realized that you can’t be late to a virtual graduation, nor can you drone on forever during a pre-recorded speech, I figured I’d give it a shot.

Upon accepting this honor, I was forwarded a few of their testimonials, and as I read through them they made mention of the word “resilience” more than once. While I appreciated the sentiment, I realized that maybe my classmates had forgotten the same thing I had, which is that none of us made it all the way here by ourselves. There is no denying that it takes grit and mental fortitude to move forward in the face of adversity, but just like my classmates had nominated me to speak, they had constantly supported me and each other over the last three years of our design journeys together, and, if there’s anything that our design journeys and the last year in the pandemic has taught us, it’s that it’s only by working together and relying on each other that we’re able to go far.

Thank you, to the Design faculty for the guidance over the last three years, and in particular to the VCD faculty for allowing me to restructure my courses to finish on time. I’d also love to give a special shoutout to Jayme Yen for her constant encouragement and empathy. Thanks once again to the family, friends and mentor figures that have helped us all out along the way.

Last, but not least, to my classmates, the graduating class of 2021. I’m going to miss y’all so much, and while I might not feel qualified to give you any advice straight from me, I’ll leave you with a quote from a fictional character from the animated series Naruto. “No matter how strong you become, never seek to bear every burden by yourself.”

Thank you, and congratulations once again to the class of 2021!