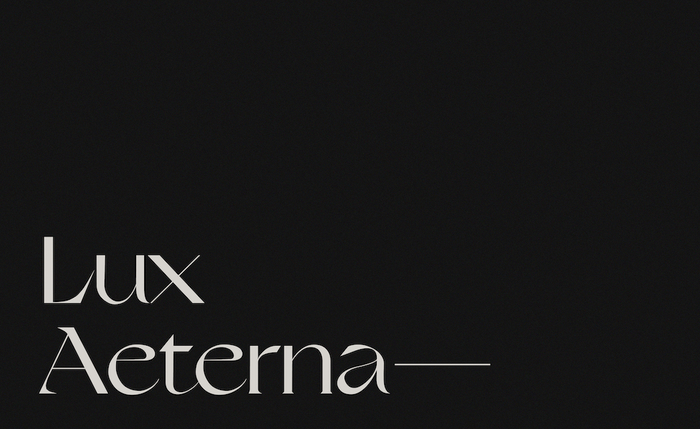 The Jacob Lawrence Gallery + Northwest Film Forum proudly present Lux Aeterna, an exhibition featuring 16 local, national, and international artists working in a wide variety of media to explore the mutability of media made and consumed using ever-evolving platforms. 30-minute viewing appointments are available for the exhibition, and the gallery hosts a free outdoor opening reception in the Art Building courtyard on July 29 from 7–9pm.

This exhibition considers how technological, economic, and cultural forces shape the ways we produce, share, and experience media — and how that media in turn influences our aesthetics and values. In tracing the currents of technical migration and image circulation, the exhibition raises timely questions about ownership and fidelity. It experiments with media as a tool for empowerment at a time of existential uncertainty. And it wonders whether media, like light, might outlast humanity, forever sending forth a message.

A pair of works by Pacific Northwest media art pioneer Norie Sato highlight the shifting nature of media production and consumption over time. The first is her 1974 videotape “Horizon,” not seen since its debut. The videotape shows on two television sets — one from the 1950s, another from the 1990s — in effect having a conversation with itself. Sato’s sculptural installation "Dis/Connect 2021" recreates and updates a 1993 piece about the passage of time and the elusiveness of image.

Much of the work in Lux Aeterna seeks to reclaim media by making the abstract into something material. For instance, Afroditi Psarra + Audrey Briot created wearable antennae to intercept NOAA weather satellite data traveling via radio waves, decoded the data to access images of the planet’s weather systems, then used those images to knit a large-scale tapestry. Evan Roth visited coastal sites, where he used an infrared camera to photograph the places where the transatlantic internet cables emerged from under the sea. Dan Paz purchased a mugshot of their father from a predatory website, then altered and printed it as a photogravure, reclaiming the image.

Other works in the exhibition speculate about the future of technology in the midst of ecological crises and economic instability. Studio for Propositional Cinema, for example, created an “Ancient Knowledge Survivalist Manifesto,” that questions what media humans might use to preserve their knowledge once humanity become obsolete, and Lynne Siefert made a 16 mm Morse code / SOS flicker film about the sea waters encroaching upon the Marshall Islands due to climate change.

Briot (FR) is a textile designer, technologist, and researcher. She is cofounder of DataPaulette, a collective and hackerspace dedicated to research in textiles technologies and soft materials. Her work is dedicated to the impact of emerging technologies on the preservation of savoir-faire, especially in textiles. She is focusing on non-verbal communication transmitted by textiles which represent for her an entire culture and even a substitute of writing. In order to do so, she relies on anthropological research going back to the Paleolithic. Following this direction she connects machines and computers to make textiles which are memory vectors with added data and interactivity. Her work has been exhibited at Ars Electronica, BOZAR and ISEA and published at ISWC and DIS. In 2020, for her collective and personal work, she received two Nominations at STARTS Prize.

Davis was born in Brooklyn and lives in Portland, Oregon. He holds a BA from Wesleyan University and an MFA from the University of Washington. He has worked in retail, social services, software development, and the culture industry.

Huyghe was born in Paris in 1962. His works often depict complex systems of life forms, inanimate things, and technologies. His constructed organisms combine biological, technological, and fictional elements to produce an immersive, constantly changing environment in which humans, animals and non-beings learn, evolve, and grow. Huyghe recently had solo exhibitions in London, Germany and New York, and from 2012 to 2014 a major retrospective of his work traveled from the Centre Pompidou in Paris to the Ludwig Museum in Cologne, Germany, to Los Angeles County Museum of Art in California.

Jackson’s multidisciplinary practice translates narratives of belonging through performative and sculptural acts that utilize repurposed imagery and objects. Her work explores themes of loss and transformation, focusing on land and landscape as sites of internal representation. Jackson grew up between New Orleans and Mamou, Louisiana, and currently lives and works in Austin, Texas. Her work has been exhibited at the SculptureCenter; CUE Art Foundation; Contemporary Art Center, New Orleans; DePaul Art Museum; Studio Museum in Harlem; and RISD Museum.

Paz uses vernacular image production to consider exposure and the conditions of embodiment. Their multidisciplinary work brings a critical and aesthetic lens to the architecture of space, demonstrating how foundational techniques of image-making are inextricable from the environmental politics of racialized subject-making. Paz has exhibited widely, including shows in London, Amsterdam, New York City, Cuba, and Chicago.

Psarra is a transdisciplinary artist and an Assistant Professor of Digital Arts and Experimental Media (DXARTS) at the University of Washington. Her research focuses on the art and science interaction with a critical discourse in the creation of artifacts. She is interested in the use of the body as an interface of control, and the revitalization of tradition as a methodology of hacking existing norms about technical objects. She uses cyber crafts and other gendered practices as speculative strings, and open-source technologies as educational models of diffusing knowledge. She holds a Ph.D. in Image, Technology, and Design from the Complutense University of Madrid, and her dissertation, Cyberpunk and New Media Art, focuses on the merging of science fiction ideas and concepts with performative and digital practices, and offers a philosophical, sociological, and aesthetic analysis of the influence of new technologies in the contemporary artistic process. Psarra’s work has been presented at international media art festivals such as Ars Electronica, Transmediale and CTM, Eyeo, Amber, Piksel, and WRO Biennale between others, and published at conferences like Siggraph, ISWC (International Symposium of Wearable Computers), DIS (Designing Interactive Systems), C&C (Creativity and Cognition), and EVA (Electronic Visualization and the Arts).

Roth is an American artist based in Paris whose work visualizes and archives culture through unintended uses of technologies. Creating prints, sculptures, videos, and websites, Roth is interested in the philosophies of hacker communities, as applied to digital and non-digital systems, and in the relationship between misuse and self-empowerment. His work is in the public collections of the Museum of Modern Art, New York, and the Israel Museum and has been exhibited recently at the 2016 Biennale of Sydney; Electronic Superhighway (2016-1966) at Whitechapel Gallery; and, This Is for Everyone at the Museum of Modern Art. Roth was born in Okemos, MI in 1978. He earned a BS in Architecture from the University of Maryland and an MFA from the Design and Technology department at Parsons. He co-founded the arts organizations Graffiti Research Lab and the Free Art & Technology Lab.

San Miguel is a writer and filmmaker working in Seattle, WA. Her work is concerned with critical approaches towards documentation and the politics of representation, visual culture, and memory. Recent works focus on avenues of tangible and intangible property through language, film, and mass production.

Sato lives in Seattle, where she makes sculpture and two-dimensional work in various media, including glass, metal, terrazzo floors, integrated design, landscape, video, and light. She has worked in video installation, sculpture and tape since the 1970s, and has used low technology to imitate high technology in her more static works. Her work about memory and the elusiveness of physical form comes from the technology of analog cathode ray tubes. She also makes work for public contexts, striving to add meaning and human touch to the built environment. Her projects are located around the country, including for the San Diego International Airport, San Francisco International Airport, Salt Lake City Light Rail, and the new Port of Portland Headquarters.

Siefert is a moving image artist originally from Seattle. Her 16mm films and digital works have been exhibited in festivals such as the Berlinale, Edinburgh International Film Festival, Antimatter Media Art, L'Alternativa Barcelona Independent Film Festival, and in galleries such as Glass Box Gallery and Microscope Gallery, among others. Her films have received awards at EXiS, Chicago Underground, and FLEX. In 2019 she became the first moving image artist to win Seattle Art Museum’s Betty Bowen Award.

Simek works in two dimensions, three dimensions, time, and sound using a variety of materials to create projects such as a room-sized crystal radio, a spacesuit indicator badge, and an observatory tower in Corinth, Vermont. Simek has exhibited and been in residency at Signal Culture, Museum of Contemporary Craft, Melanie Flood Projects, PDX Contemporary, Littman Gallery at Portland State University, Feldman Gallery at Pacific Northwest College of Art, and Fairbanks Gallery at Oregon State University. She has lived in the Pacific Northwest since 2007.

Soldi is a Peruvian-born, Seattle-based artist and curator. His practice centers on how queerness and masculinity intersect with larger topics of our time, such as immigration, memory, and loss. He has exhibited internationally at the Frye Art Museum, American University Museum, Griffin Museum of Photography, ClampArt, The Print Center, Museo MATE, Filter Space, and Burrard Arts Foundation, among others. He is co-curator of the High Wall, a yearly outdoor video projection program that invites immigrant artists and artists working on themes of diaspora and borderlands to intervene the facade of a former immigration center building in the heart of Seattle.

Based in Philadelphia, Sprang tells stories informed by Black radical and experimental traditions. For the past 15 years, he has sustained a multidisciplinary practice with the understanding that storytelling is at the foundation of all disciplines. He has built relationships with communities and audiences through experimental theater, sound art, conceptual art, performance art, poetry, and spoken word, cutting through segregated stories, timelines, archives, and imaginations. Sprang has completed several domestic and international residencies and has also presented his work at The Public Theater, Baryshnikov Art Center, Vox Populi, Abrons Arts Center, The Apollo Theater, The Brooklyn Museum, Knockdown Center, Pioneer Works, Painted Bride Art Center, and The Kitchen.

Stobbs was born in 1995. He is a part-time lecturer and part-time carousel operator.

This is an anonymous artist collective founded in 2013 in Düsseldorf, Germany. Through language, actions, sounds, and images, through production, publication, exhibition, and fictions, the Studio seeks to reconfigure culture from a network of ideological formations into a dialogue of hypothetical gestures. It has exhibited solo shows throughout Germany as well as at Fondazione Morra Greco in Naples, Italy, Swiss Institute New York, and mumok in Vienna. It has performed at LISTE Performance Project in Basel, Switzerland, Kunstsammlung NRW in Düsseldorf, and more.