Operations and teaching are online. Current and prospective students: please visit our COVID-19 Updates pages. Faculty and staff are available via email. 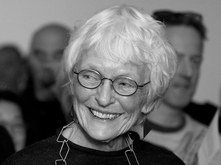 This year marks 100 years since the birth of Jacob Lawrence. Seattle became his home in 1970 when he arrived to teach at the University of Washington. The University and the city are celebrating him in many ways. Read more The School is sad to announce the passing of 3D4M Professor Emeritus Akio Takamori on January 11, 2017. He joined the School faculty in 1993 and taught until his retirement in 2014. Read more 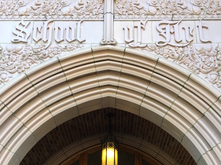 Finalists for two full-time, tenure-track faculty positions — one in Art History and one in Interdisciplinary Visual Arts — are visiting campus. Each candidate will give a lecture. Read more

The Jacob Lawrence Gallery is currently showing two exhibitions from the Utopia Neighborhood Club series; both run through March 4:

Jacob Lawrence: The Legend of John Brown + Other Works

Painting + Drawing MFA student Ryna Frankel has her first solo exhibition at the Linda Hodges BLUR Gallery in Seattle this month. She is also doing an Instagram takeover for the School this week.

3D4M Professor Doug Jeck did a 4-day residency with fellow sculptural ceramicist Christine Golden in Zanesville, Ohio. Watch a video about their collaboration. Their work will be exhibited at Eutectic Gallery in Portland, Oregon, during March 2017.

Art History Assistant Professor Adair Rounthwaite has published her first book, Asking the Audience: Participatory Art in 1980s New York. She also is the recipient of an RRF Scholar award to support a new book project.

Joe Ballweg (BFA 1998) has been selected for the 2017 Invitational Exhibition of Visual Arts at the Academy of Arts and Letters, opening March 9 in New York City.

Patrick "Duffy" De Armas (BA 2010) is one of the members of Electric Coffin, and they have an exhibition — Future Machine — at the Bellevue Arts Museum.

Jacob Foran (MFA 2010) has a solo exhibition titled In Between Dreams at Abmeyer + Wood in Seattle during February.

Susie Lee (MFA 2006) is featured in a College of Arts & Sciences article for their most recent Perspectives newsletter.

Ellen Lesperance (BFA 1995) won the $15,000 Chiaro Award from Headlands Center for the Arts in Sausalito, California.

Justen Waterhouse (BFA 2015) has organized a film series at the Henry Art Gallery.

Read the summary of January news about alums.

The first part of Utopia Neighborhood Club: A Student Response has closed at the Jacob Lawrence Gallery, but you can view photos in this Facebook album.

Feb 21
How Do We Know That? Robert Kosara on Data Visualization
Kane Hall