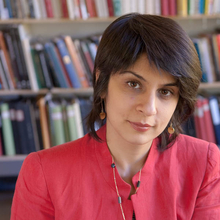 Assistant Professor Sonal Khullar is the newest faculty member in the Art History Division. Her region of specialty, South Asia, has a long and ancient history, but her research interests focus on the last two hundred years. Professor Khullar’s arrival at the University of Washington in the autumn of 2009 was the result of a successful partnership. South Asian Studies, a Jackson School of International Studies program, in consultation with the Art History Division of the School of Art, identified the need and successfully applied for funding to support a position in South Asian art history.

Many people wonder about the meaning of the phrase “South Asia”. It refers to the present-day nation states of India, Pakistan, Bangladesh, Bhutan, Nepal, and Sri Lanka. It is a region of art that Professor Khullar did not focus on until graduate school. For her undergraduate degree at Wellesley College, she majored in comparative literature and economics, but in her senior year she took “two transformative art history courses on the visual culture of nineteenth-century Paris and the history and theory of feminist film.” These classes made her aware of “the possibility of a unified approach to the relationship of aesthetics and politics.” During her graduate studies at the University of California, Berkeley, Professor Khullar pursued her “dual commitment to feminist theory and art history” while working on a variety of projects: a master’s thesis on modernist murals painted by Sri Lankan artist George Keyt in a Buddhist temple in 1939-40;

assisting on two films, Mimra (2005) and Nothing is Missing (2005), about migration, maternity, and Islam in post-9/11 Europe, which were shot on location in Turkey and Tunisia; and developing an exhibition in New Delhi of contemporary feminist art, entitled Fluid Structures: Gender and Abstraction in India, 1973-2008, which linked the practice of two generations of women artists.

Professor Khullar has already taught three Art History classes and has several more planned for the next two academic years. Topics for her undergraduate courses include the art of South Asia from antiquity until the early modern period; art and empire in South Asia; modern and contemporary art in South Asia; the critical historiography of museums in South Asia; and the aesthetics of miniature painting. Her graduate seminars will focus on the role of fragments, ruins, and traces in the history of South Asian art and the history of modernism and modernity in non-Western contexts. She says, “In these courses, I emphasize the historical permeability of cultural boundaries and the relationship of art objects to their social and political contexts, which is to say, their production, circulation, and reception. My goal is to engender attentiveness to particular images, objects, and sites alongside critical inquiry into questions of globalization, cosmopolitanism, and trans-nationalism.”

Her current book project is titled Worldly Affiliations: Artistic Labor, National Identity, and Modernism in India, 1930-1990. It is based on her dissertation and “traces change and continuity in artistic production from the late colonial through the postcolonial period in India. It analyzes how artists conceived their relationship to practices in the West and traditions indigenous to the subcontinent.” During autumn 2010, Professor Khullar will be on a research trip in India, based in the cities of Delhi, Bombay, and Baroda. She plans to complete research for her book and start research on a new project titled “The Art of Dislocation”, which will examine “collaboration as a critical response to globalization in contemporary art from India, Pakistan, and Sri Lanka. It analyzes how artists have responded to conflicts–defined along religious, ethnic, caste, linguistic, classed, and gendered lines–over place by embracing a collaborative practice of art that engages and departs from models of site-specificity and social activism in the West.”

Shortly after arriving in Seattle, Professor Khullar gave a lecture titled “Contemporary Art in India and Its Global Futures” at the Seattle Asian Art Museum (SAAM) as part of the “Asia in Focus” series. The Gardner Center for Asian Art and Ideas at SAAM then asked her to introduce her research and the field of modern Indian art to the Seattle community. She gave a series of three lectures in July 2010 titled “Three Artists, Three Traditions of Modernism”, which were based on a chapter Professor Khullar contributed to The Cambridge Companion to Modern Indian Culture (due to be published in late 2011). As she says, “This kind of outreach strengthens the relationship between the University of Washington and the Seattle Art Museum and lays the foundation for future collaborations between students, faculty, curators, and members of the community.”