Our Man at TED

Operations and teaching are online. Current and prospective students: please visit our COVID-19 Updates pages. Faculty and staff are available via email.
Submitted on October 15, 2010 - 3:00pm 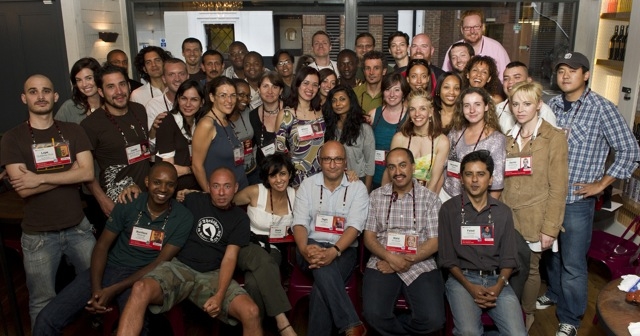 When Design Division Lecturer Dominic Muren received his invitation to participate in the July 2010 TEDGlobal conference, he was thrilled. He had been chosen as one of twenty-three TEDGlobal Fellows, and this would give him the opportunity to hear talks by and interact with dozens of cutting edge, international thinkers. It was a designer’s dream come true.

TED is a small nonprofit devoted to “ideas worth spreading”. Its name is an acronym for the three worlds that were brought together at the organization’s original meeting in 1984: technology, entertainment, and design. Since then, science and culture have been added to the mix. TEDGlobal happens every summer in Oxford, England, and is one of several gatherings now hosted by TED. Featured speakers at these events give short talks, and most of the presentations are available on the TED Talks website, which attracts millions of visitors from around the world.

Here is Muren’s first-hand account of his TEDGlobal experience:

The TEDGlobal Fellows program brings together young change-makers from around the world and across disciplines: from performance art to design, human rights to engineering. We met for a pre-conference at Keble College, an amazing campus built in 1870, around the time that academics halfway around the world were graduating the first students at the University of Washington. It’s a relatively young college for Oxford University.

We spent two days meeting each other, getting coached in speaking and networking, and practicing four-minute talks about our research. We had the additional mentorship of the senior fellows, young people who were once in our shoes but applied to stay on for longer-term projects.

As the real conference began, and over 700 attendees poured in from all over the world, we gave our talks to a packed house. The fellows’ work spans the spectrum, from a photographer embedding himself with a company of soldiers in Afghanistan to report on the war via Facebook to a woman working to build an electronics recycling infrastructure in Trinidad. I talked about modular, hackable consumer electronics and demonstrated a prototype watch that I made with the help of Mark Ganter, Professor of Mechanical Engineering at the University of Washington.

With the start of the conference, the real work began. I’ve been to quite a few lectures in my life and also count myself as sociable at conferences. TED tested my abilities like nothing I’ve ever experienced.

There were so many talks to see. Some days there were as many as twenty, and they were eighteen minutes each. Often, these talks jumped from one fascinating topic to another, all equally exciting. I could feel my brain cramping up. To top it all off, when we weren’t listening, we were talking with world-class scientists, Julian Assange from Wikileaks being one, and musicians like Annie Lennox and Imogen Heap (Imogen thought the watch was cool). There was plenty to talk about. And, of course, after the party, there’s an after-party. Yikes!

The parties were definitely fun (a revolution without dancing isn’t worth having, right?), but the best part of TEDGlobal was forming connections with the other fellows. I already have plans to invite one artist to come speak on his incredible info-sculpture, to collaborate with a Ghanaian architect on furniture design, and to work with an Israeli designer and Ecuadorian architect to curate an exhibition. I’m going to try video-conferencing with designers in Nigeria and Trinidad for some design classes next year. On top of all that, I have a new Costa Rican Skype-pal and standing invitations to use couches in thirty countries around the world.

This experience gave me some significant insights that will affect my teaching. First, that design education has to equip students with better tools and strategies for bridging the geographic and cultural gaps all around us, even between cities or states in the U.S. Second, design students need to stop thinking in terms of a developed/developing world dichotomy and start examining social and economic contexts free from an imagined “progress”. Accra is not better or worse than Atlanta, just very different. Most of all, TEDGlobal re-affirmed my conviction that there are wonderful people doing great things all over the world. And those things will be even better the more we encourage students to connect to that world.