We look forward to safely returning to in-person instruction and activities this autumn quarter. Current and prospective students please visit our COVID-19 Updates pages.
Submitted on June 14, 2014 - 1:00am 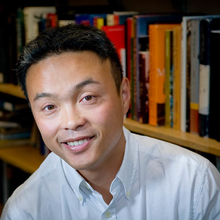 Art History Professor Haicheng Wang had his first book debut in May 2014. Titled Writing and the Ancient State: Early China in Comparative Perspective, it was published by Cambridge University Press. As it says on the dust jacket, the volume “explores the early development of writing and its relationship to the growth of political structures,” looking at this association in China as well as several other ancient cultures around the world. Detailed information about the book is available on the publisher’s website. This publication is based on Wang’s dissertation research, and the manuscript was considered as part of his tenure and promotion review. He has been approved for promotion to Associate Professor with tenure, effective in September 2014.

This is not the only writing project on which Wang has been working during the last year. He is author and co-author of two chapters in the forthcoming book titled The Cambridge World History, Volume III: A World with Cities, 4000 BCE – 1200 CE (Cambridge University Press). Also in press is his chapter titled “Beautiful Writing in Egypt and China” for the publication titled The Egyptian Image in Context (University of Pennsylvania Press). In addition, Wang has a chapter each in two other books: Art and Archaeology of the Erligang Civilization (2014, Princeton University Press) and Agency in Ancient Writing (2013, University Press of Colorado).