We look forward to safely returning to in-person instruction and activities this autumn quarter. Current and prospective students please visit our COVID-19 Updates pages.
Submitted on July 20, 2014 - 1:00am 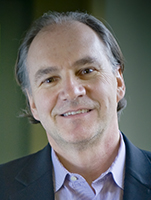 We are delighted to announce that, in honor of Professor Christopher Ozubko’s eighteen-year tenure as Director of the School of Art + Art History + Design, alumni, faculty, staff, and friends have come together to establish an endowment. The Christopher Ozubko Endowed Graduate Support Fund will provide critical and permanent funding for our graduate programs in Art, Art History, and Design.

On 01 July 2014, Ozubko stepped down from his position as the Director of the School of Art + Art History + Design and as the first holder of the Wyckoff Milliman Endowed Chair of Art. He has already returned to his teaching and research, introducing a new course, Design Thinking, this summer, to be immediately followed with his 10th Design in Rome Exploration Seminar.

Born in Edmonton, Alberta, Canada, Ozubko received degrees from the University of Alberta and the Cranbrook Academy of Art before joining the School of Art faculty in 1981. Under the auspices of Studio Ozubko, he established his professional credentials as a graphic designer who has exhibited and presented his work throughout North America, Europe, and Asia. He has been recognized with over 100 design awards, and his work has been published in all of the major design magazines.

Ozubko’s areas of interest are in typography, design history, and international design education. As a UW faculty member, he has developed collaborations with European and Asian design institutions to promote student and faculty exchange. He is the founder of the Design in Rome Exploration Seminar, based at the UW Rome Center, and has led exchanges with China and Japan.

By 1989, Ozubko was appointed co-chair of the Graphic Design program, now Visual Communication Design, and in April of 1996 he was appointed Director of the School of Art. He has led the school during a period of tremendous change with successive transitions, the advent of new technologies, and adaptation of the mission and curriculum in order to maintain its edge within one of the nation’s great public research universities.

Over the next few months and years, the school will grow the Christopher Ozubko Endowed Graduate Support Fund and continue our commitment to support graduate students. If you would like to make a donation in honor of Professor Ozubko, please go to http://giving.uw.edu/christopherozubkograd.

Image credits: homepage photo by Mel Curtis from 2010 Design in Rome Exploration Seminar; detail of portrait by Doug Manelski on this page.