What Makes Us Special?

We look forward to safely returning to in-person instruction and activities this autumn quarter. Current and prospective students please visit our COVID-19 Updates pages.
Submitted on February 24, 2015 - 11:05am 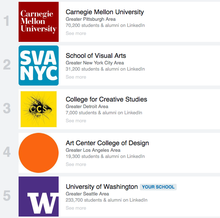 In October 2014, LinkedIn ranked the UW as one of the top five schools for design based on the success of recent graduates in landing desirable design jobs. We thought it would be worthwhile to contact some of the companies and organizations who hire our graduates to ask what our students have that makes them stand out. Here are some of their comments:

Bill Flora from Tectonic says, “We love UW Design students! They are a big part of our staff now. We’ve looked at students of other schools but keep coming back to UW to find the skills and talent.”

When describing interns he has hired from the Division of Design, Scott Davidoff of NASA’s Jet Propulsion Laboratory says, “They shared a singular passion for design and a belief in the collaborative studio culture that allows it to flourish.”

Matthew Mulder of Digital Kitchen says that our students and alumni “regularly demonstrate the capacity, understanding and nuance to bring a creative idea forward, seek critique and execute to very high standards.” He also lists additional skills that he finds in our graduates:

Facebook’s Drew Hamlin (BFA 2009) has this to say: “For Product Design, we’re looking for skills across three verticals—product strategy, interaction design and visual design. For new grads and interns, what we’re really looking for is a very solid foundation in at least one of these three verticals and aptitude and eagerness to learn in the others. Sometimes you’ll find students who possess strengths in two or all three of these skills though—we’ve had multiple instances of designers like this coming from UW—and that’s a rockstar hire.”

We’re grateful to these professionals who took the time to share their observations with us. These companies and organizations are just a few of those who have hired our graduates. To get a better sense of where our alumni have landed, take a look at these infographics that were created by Visual Communication Design Professor Karen Cheng and Jason Petz (MDes 2014).