We look forward to safely returning to in-person instruction and activities this autumn quarter. Current and prospective students please visit our COVID-19 Updates pages.
Submitted on May 8, 2017 - 1:20pm 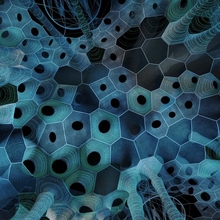 In February, Jenny Sabin Studio was selected as winner of this year’s Young Architects Program competition. The program was founded by the Museum of Modern Art in New York City and MoMA PS1 in 1998. Approximately fifty firms are nominated each year, and five finalists make preliminary proposals. Sabin’s project, Lumen, is a pavilion created from woven tubular structures that respond to body density, heat, and sunlight. It will be on display at MoMA PS1 beginning in late June.

The work of Jenny Sabin (BA/BFA 1998) is at the forefront of a new direction for 21st century architectural practice — one that investigates the intersections of architecture and science, and it applies insights and theories from biology and mathematics to the design of material structures. Sabin is the Arthur L. and Isabel B. Wiesenberger Assistant Professor in the area of design and emerging technologies at the Department of Architecture, Cornell University. She is principal of Jenny Sabin Studio, an experimental architectural design studio based in Ithaca, New York. She is also director of the Sabin Design Lab at Cornell, a hybrid research and design unit with specialization in computational design, data visualization, and digital fabrication. Sabin holds degrees in ceramics and interdisciplinary visual art from the University of Washington and a master of architecture from the University of Pennsylvania. She has been awarded the AIA Henry Adams first prize medal, the Arthur Spayd Brooke gold medal for distinguished work in architectural design, a Pew Fellowship in the Arts, the Architectural League Prize for Young Architects by the Architectural League of New York, and she was named a USA Knight Fellow in Architecture.

Sabin was the guest speaker at the Anne Focke Arts Leadership Award event on April 29. She also shared her recent projects with 3D4M students, faculty, and invited guests on April 27.