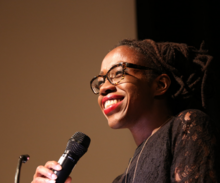 The School of Art + Art History + Design and the Jacob Lawrence Gallery are pleased to announce that Seattle artist C. Davida Ingram is the recipient of the 2018 Jacob Lawrence Legacy Residency (JLLR).

Beginning in 2015, the Gallery made a commitment to dedicate every February — Black History Month — to artists and ideas of the African Diaspora. Originally conceived as an exhibition initiative, it quickly expanded to become an artist-in-residence program. HOWDOYOUSAYYAMINAFRICAN? and Steffani Jemison participated in 2015 and 2016 respectively. In 2017, to honor the 100th anniversary of Jacob Lawrence’s birth, the Gallery featured programming and an exhibition of the artist's work. The JLLR begins in January 2018 while Ingram develops a project. Her current plan is to work on a video titled The Deeps with Hanna Benn. During the following month, the Gallery will host an exhibition built around Ingram's project. This year's JLLR is supported by an NEA Art Works grant.

C. Davida Ingram is an award-winning artist who is passionate about beauty and social justice. Her primary muses are race, gender, and social relationships. Ingram's impulse is to imagine tactics to get free, not further prescribing Otherness. With this in mind, she uses unorthodox mediums — Craigs List ads, hypnosis, drones, cell phone videos, among other things — to reshape what is possible in her own identification with being a black queer woman. Her art has been shown at the Frye Art Museum, Northwest African American Museum, Evergreen College, Bridge Productions, Intiman Theater, Town Hall, and more. Her writings have been included in Arcade, Ms. Magazine blog, The James Franco Review, and The Stranger. Ingram received the 2014 Stranger Genius Award in Visual Arts. In 2016, she was a Neddy Artist Award finalist, a Kennedy Center Citizen Artist Fellow, and was voted one of the twenty most talented people in the city by Seattle Magazine.