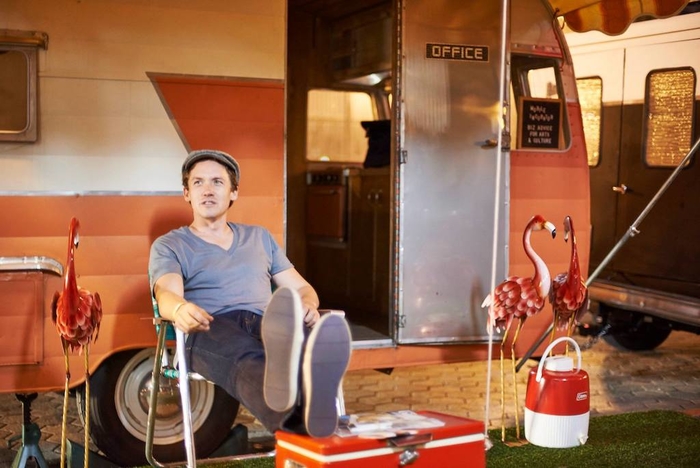 Lucas Spivey and his Mobile Incubator; photo by Jason Fronczek

Lucas Spivey has a background that is all over the map in the arts, and that is a good thing. He is now traveling all over the United States map to help artists, designers, writers, producers, directors, and other cultural entrepreneurs bring their ideas to life.

Early on, Spivey was involved in theatre, creative writing, and performing bluegrass music. Then he came to the University of Washington, where he earned an Interdisciplinary Visual Arts (IVA) degree with an Art History minor in 2009. Spivey took full advantage of the IVA degree, learning about fibers, printmaking, painting, and ceramics while also learning as much about ancient and contemporary art history as he could. While in Seattle, he also was co-chair of the Vera Project Gallery, taught for Path with Art and the YMCA, gave tours at museums (SAM and Wing Luke), and did freelance work for Suyama Space, Lawrimore Project, Open Satellite, and other installation art spaces.

The year 2010 brought a move to Massachusetts where he managed galleries at a small art college and started an independent art space called 17 Cox. The latter was Spivey's first run with an incubator, focusing on launching emerging artists and professionalizing art careers. He decided to learn even more about the business side of things and pursued an MBA in Finance, which he completed in 2014.

When it came time to choose an office, Spivey took the creative route again. He found a derelict 1957 Shasta teardrop trailer, turned it into a show piece, and Mobile Incubator was born. He and the trailer hit the road in 2016 and have since traveled thousands of miles and visited over 100 locations. Spivey has discovered that the trailer is a way to capture people's interest and start a conversation about his consulting work, which allows him to apply all aspects of his background. During last summer, he (and the trailer) spent three months at the Boston Center for the Arts as a Public Arts Resident. He met with hundreds of people, providing art business advice and starting a podcast to share some of those conversations. Among his other venues since then were three in Florida: Art in Odd Places (Orlando), Ringling College of Art & Design (Sarasota), and Locust Projects (Miami). Plans are already afoot for more 2018 travels.

I envision this as a 20 to 30 year project, hitting every state, every metro region, and, hopefully, every county. As I travel, I've seen that there are limitless ways to model arts businesses to take advantage of different regions and resources. I need at least 20 years to chronicle and cross pollinate those strategies.