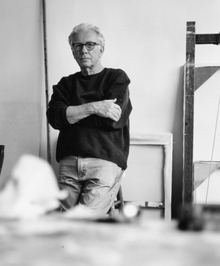 The School of Art + Art History + Design is sad to announce the passing of Painting Professor Emeritus Robert C. Jones on December 23, 2018. He joined the School faculty in 1960 and taught until his retirement in 1995.

Jones was well-respected as an artist and educator. Jamie Walker, the School's current Director, took an undergraduate course from Jones around 1980. Walker remembers him as a professor who supported students who were exploring with paint. Professor Philip Govedare said of Jones, "Bob was a warm and engaging colleague, with a wonderful sense of humor. He admired Matisse’s use of color, and he brought that sensibility and passion into his teaching."

Robert Cushman Jones was a pure painter and a great inspiration for me and many others. When I look at his work, I see symphonies. He composed visual music with shifting tonalities, shapes and colors. I can almost hear what I see. When artists of his brilliance die, the whole world suffers. My eyes are full of tears.

No public memorial event is planned. Family and friends will hold a private gathering at a later date.

Already in the works before his passing, two Seattle galleries are hosting joint exhibitions of work by Jones and his equally well-known wife, artist Faye Jones. Both exhibitions are titled In Tandem. James Harris Gallery opened their portion of the exhibition on January 8, and it will run through February 23. G. Gibson Gallery opens their exhibition on January 24, and it will be open through March 2. Both galleries have receptions on Saturday, January 26: 1–3pm at James Harris Gallery and 3–5pm at G. Gibson Gallery.