Where Study Abroad May Lead 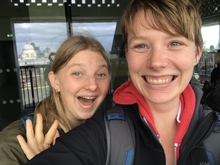 Claire Peckham (BFA 2015) and Marijke Keyser (BFA 2016) met in 2013 while on the School's Tuscany Exploration Seminar. They were roommates and quickly discovered that they had similar approaches to travel. That time in Italy was transformational for both of them. Peckham learned to feel comfortable investigating new territory on her own, and Keyser had an eye-opening crash course in contemporary art at the Venice Biennale. Each of them did another study abroad program the following year. Peckham attended the School's London Exploration Seminar, and Keyser did a quarter-long program in Lyon, France, where she lived with a host family.

Both of them began thinking about doing graduate study abroad while they were still undergraduates. Peckham's time in London on the Exploration Seminar made her realize that she wanted to study and live in the United Kingdom. Keyser, who had a strong interest in British artists, was pointed to London by a Painting + Drawing professor after Keyser mentioned she was thinking about a master's degree in order to teach.

Peckham first applied to attend graduate school immediately after her undergraduate degree. She was accepted by five schools, including University College London, but "realized I couldn’t describe to myself exactly what I wanted to get out of grad school, and I wasn’t ready to make that kind of financial commitment without feeling grounded in my decision." Two years later, she applied to a different group of schools and was accepted at The Ruskin School of Art, Oxford University, which has a one-year MFA program.

Keyser applied to start graduate school in 2016. Having never been to London, she went there to visit each of the three programs she was considering. The energy at the Slade School of Fine Art, University College London, best matched what she wanted. Her program required two years to earn an MFA. Keyser was specifically looking for the forced dislocation of graduate school, especially when done abroad: "Transplanting forced my ideas about myself and the kind of art I make to get all torn up and tossed to the four winds. It made it supremely obvious how much of an art practice is the contextual stuff, who you’re with and the cultures they bring with them." She never did a single painting while there even though that was her focus at UW.

Peckham and Keyser each talk about being intentional about attending graduate school, even more so when done abroad. Peckham says, "Be clear within yourself on what you want out of grad school, why you want to go, and who you are. Don’t expect grad school to take care of you, and don’t play victim to the system. Be responsible for your own life. You’re the artist; you’re creating it!"

Each received her MFA in 2018. Keyser worked at the Slade as a studio manager during the summer after graduation and then used a travel grant to spend 2 1/2 weeks visiting sites in Greece, Macedonia, and Italy connected to her practice. She returned to Seattle after her visa expired. She has a February exhibition in London, is working at the Henry Art Gallery, and is looking into teaching opportunities. Peckham has been able to stay in London on an internship visa while working at an architectural firm that does work intersecting with the fine art world. She is also researching Celtic mythology and Celtic places/architecture with an eye on a possible PhD program in England.

It is hard to predict where study abroad may ultimately take you, but it is an excellent way to learn about yourself.