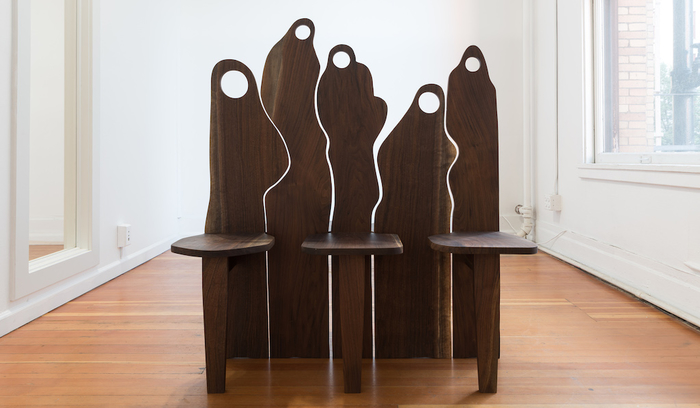 The Jacob Lawrence Gallery is pleased to present Irreducible Forms, an exhibition of work by the second-year Master of Fine Arts students working in and between the media of installation, time-based visual art, painting, and sculpture. In a time in which data is mined to forecast behavioral trends and complex sociopolitical situations are flattened into clichés and clickbait, the concept of irreducibility insists upon understanding events and forms as nuanced, complex, and resistant to simplistic capture.

Armitstead was born in Seattle, WA, in 1989. He received a BFA in 2011 from the School of the Art Institute of Chicago (SAIC), where he focused mainly on ceramic sculpture, architecture, design, and painting. After graduating from SAIC, Armitstead attended a two year post baccalaureate program in ceramics at University of Wisconsin, Madison. There he continued to make work as well as further his research. In July 2015, he started a two year residency at Pottery Northwest, a ceramic studio in Seattle, where he was able to sculpt and teach sculpture classes. Over the past years, Armitstead has primarily worked in ceramic sculpture, yet he also has often incorporated wood, concrete, metal, and plants into his work. Along with viewing himself as a sculptor, Armitstead considers himself a painter, designer, builder, and gardener. His work is intuitive, colorful, abstract, structural, and urgent; however, his ideas around the making of his pieces are often fueled by concepts that seek to relate to or interact with people, landscape, and design. In autumn 2018, Armitstead started his MFA with the 3D4M: ceramics + glass + sculpture program at the University of Washington.

Davis was born in Brooklyn in 1985 and has lived between New York and the Pacific Northwest for the last ten years. He has been an artist in residence at Real Time and Space (Oakland, CA), Signal Fire (Eagle Creek, OR), and Macie Gransion (New York, NY). Davis co-founded Appendix Project Space, an art exhibition space that operated in Portland, OR, from 2008–2013. In 2014, he was included in the Portland Biennial and received a Career Opportunity Grant from the Oregon Arts Commission. Davis has most recently shown work at Camp Eternal Hell Chamber (Cobleskill, NY), American Medium (New York, NY), and Veronica (Seattle, WA).

Gonzales is a long term Seattle resident and Colorado native. They are currently attending the University of Washington in pursuit of the MFA in Photo/Media. Recently they have focused on working through the visual principles of national and international minimalist land artists of the late 1960s and early 1970s. Gonzales' forms and structures are in conversation with Robert Smithson, Michael Heizer, and the Japanese group GUN (Group Ultra Niigata). These artists and contemporaries of that time investigated land as both a medium and physical record of the culture in that space prior to the interruption caused by the artist's own hand. The investigation of land as a medium has led to minimalism as both a material and object to possess. Gonzales' past exhibitions include Mount Analogue (2019), a CoCA Residency (2017), Fred Hutch (2016), Cornish College of the Arts (2016), Signal Fire Residency (2015), Jack Straw (2015), and Wheelhouse Coffee (2014).

Huang is a painter from China. After obtaining the BFA degree from Guangzhou Academy of Fine Arts, he is now an international student in the Painting + Drawing program. Huang has long been trained with representational art education. Most of his works are done in the style of hyper-realistic still life. He tried to explore the possibilities in the mixture of representational elements and the elements of absurdity within the still life as a form. After studying for a year at UW, Huang extends more on the aspect of realism while he increases the color contrast and strengthens the sense of humor in his painting. He is currently a second-year grad here in the School of Art + Art History + Design, which will be another great year for providing works.

McKinney was born in the San Francisco Bay Area in 1980, where his father gave him an education on industrial painting throughout his childhood. He received his BA from University of California at Berkeley in 2015, and he is currently working on his MFA at University of Washington. In 2010, McKinney fell ill with a rare disease of the brain called Pseudotumor Cerebri. As his condition progressed, so did his practice. His new work flourished into abstract paintings rooted in materials and formalist technique. McKinney is the recipient of the Allied Arts Association Scholarship in 2019 and is Motif’s visiting artist for 2019–2020 season. His work can be seen throughout the West Coast from San Francisco to Seattle.

Romero was born in Salt Lake City, Utah, and served as a missionary in Micronesia from age 19 through 21. The extreme difference in climate and culture was deeply impactful. Romero earned his BFA degree in ceramics from Brigham Young University – Idaho and participated in a one year post baccalaureate program at the University of Florida where he began exploring the exoticism of plants and flowers through his work. Afterward, Romero worked as a Resident Artist/ Studio Technician at San Diego State University for two years where he continued to be heavily exposed to tropical plants. He is currently studying sculpture as a graduate student at the University of Washington. His ideas while at school have deepened and resulted in the use of other mediums than clay including wax, found objects, and plastics. Romero finds great satisfaction and fulfillment while working in the studio, but his greatest pride and joy come from his wife and four children.

Simek experiments with an array of materials, making works in two dimensions, three dimensions, time, and sound. Works have included a room-sized crystal radio, an invisibility cloak, a spacesuit indicator badge, and an observatory tower in Corinth, Vermont. Simek has made exhibitions and had residencies at Signal Culture, Museum of Contemporary Craft, Melanie Flood Projects, Littman Gallery at Portland State University, The Feldman Gallery at Pacific Northwest College of Art, and Fairbanks Gallery at Oregon State University. She has lived in the Pacific Northwest since 2007.

Yin was born and raised until age 18 in Beijing, China. He received his BFA from the School of Art + Art History + Design at the University of Washington where he is currently an MFA candidate in Painting + Drawing. Working with both historical references and contemporary influences, Yin examines the issues of identity from the composite perspective of a Chinese immigrant and Asian minority in American society today. His practice focuses on the struggles and trauma of an individual's adaptation to a new culture in order to address cultural indifference. During summer 2019, Yin participated in Tropical Lab 13: Erase, an artist residency, hosted by LASALLE College of the Arts in Singapore, where his painting was exhibited at the ICA Singapore.