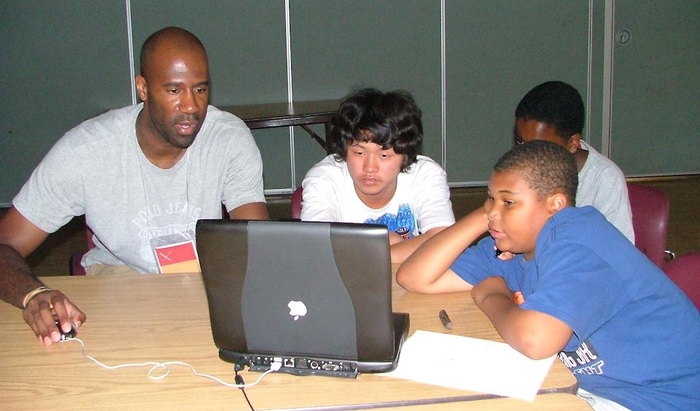 Maurice Woods completed a BFA in Graphic Design in 1995 and then an MFA in Visual Communication Design in 2005. While a graduate student, he created the Inneract Project (IP), which has the tag line "Empowering the Next Generation of Black and Brown Designers." Since IP recently celebrated its fifteenth anniversary, we spoke with Woods about his early years as a designer, the creation of IP, and its future.

Q: Tell us about how you came to study design at the University of Washington.

A: I came to the UW on a basketball scholarship with dreams of playing in the NBA, but I was red-shirted [did not play] in my freshman year and then didn't play much in my sophomore year. It was a big reality check to realize that I probably wasn't going to play in the NBA, I wasn't doing well in school, and I needed to choose a major but had no idea what to do. My mother and I sat down with the UW course catalog, and she saw graphic design. She pointed out that I loved to draw as a kid. It was something I could spend hours doing in my room because it provided relief from dealing with my learning disabilities, and it helped ground me. When I went to the first graphic design class, I fell in love with the work. It wasn't until later that I fully understood how competitive the major was and how important that first class was for me to get accepted into the major.

Q: You have mentioned in previous interviews that your Seattle mentors were Professor Doug Wadden and designer Tony Gable. Tell us more about how they influenced you.

A: All my undergraduate professors (Doug Wadden, Chris Ozubko, Judy Anderson, John Whitehill-Ward, Dick Dahn, and visiting instructor David Edquist) were influential in encouraging me to pursue design and becoming the designer I am today. They were also supportive of me being on the basketball team and sometimes having to miss classes because of traveling for games. I was the only student of color in graphic design then, but I never felt out of place. I felt like I belonged.

I really gravitated towards Doug's work because I loved his typography, shapes, and colors. He also was very straight-up and became something of a father figure. I trusted him because he could be brutally honest. Some people are put off by that, but I was used to that level of discipline after years of working with basketball coaches. It gives you a thick skin. I wanted to design like Doug.

Sometime after becoming a graphic design student, I was in the Central District visiting a friend. There was a poster/framing shop around the corner, and I felt drawn into it. I saw a poster I really liked, so I asked about who did it. The designer's name was Tony Gable. I was able to contact him soon after that, and we hit it off right away. Having grown up in a mainly Black neighborhood in the San Francisco Bay Area, Seattle was a little strange to me. He was someone who fully understood my background, and I could really be myself with him. I thought the world of him. He owned his own design firm, and it was important to have exposure to someone like him early in my career. It showed me the possibilities. I stayed in touch with him until he passed away in 2016, and I often asked his advice for work and life.

Looking at my design work over the years, I can see the influence of both Doug and Tony.

Q: There were several years between your undergraduate and graduate degrees. What were you doing during that time, and what prompted you to return for a master’s degree?

A: I played professional basketball overseas for several year. I played in Spain, Greece, France, and Japan. It was a good life experience, but it wasn't a great financial experience. I came back to the USA around the time of the dot-com crash, and it was hard to find a job, especially because I hadn't been doing a lot of graphic design work during those years away. I ended up taking a job at a Costco warehouse and did freelance design work at night. I put my portfolio on a CD and drove it to every design firm in the Bay Area that interested me. People thought that was a bit weird to just show up with my portfolio, and, being a 6' 10" Black man, I tended to surprise people even more. Eventually, I did get some freelance work for firms. After about a year and a half of long hours, I started thinking about graduate school as a way to advance my career. I had a phone conversation with Doug Wadden, and he encouraged me to come back to UW. I wanted a program that was more practice-based, and I wasn't finding that in California. Doug helped find the financial support I needed to make the move, and I headed back to UW.

Q: You created IP while a graduate student. Tell us how that started and how it changed when it moved to the Bay Area.

A: I was in one of Annabelle Gould's classes. She challenged us in an assignment to use design as a way to change the world. I thought about how I didn't know anything about design until I was in college; I thought it would be good to expose kids of color to design at an earlier age. So, I wrote a proposal. Annabelle thought it was good and encouraged me to try making it happen. I was coaching basketball at the time, so I went to the community centers I knew through that. A lot of them gave me push back and weren't very helpful. Finally, a woman who was changing jobs, from Van Asselt Community Center to Delridge Community Center, said I could try it at Delridge. I put up posters at a lot of community centers and all over the Central District. Three students showed up for my first class at the beginning of summer. There were 30 students by the end of summer. I kept working on it, getting other design graduate students and the Technology Access Foundation (TAF) involved.

It continued in Seattle for a while, even after I graduated and moved back to the Bay Area. Eventually, it got too hard to keep it going from a distance, and AIGA San Francisco was interested in helping IP get started in that area. Because design graduate programs in the Bay Area don't have a focus on teaching like they do at UW, we had to take a different approach. Instead of graduate students, we recruited design professionals to work with me. People start out as teaching assistants, become teachers, and then can be on the committee that trains the teachers. It is great to see the passion and compassion of these designers who want to work with the kids.

Q: IP recently celebrated a 15-year anniversary. Was your celebration in October 2019 a success?

A: Yes! We weren't sure what would happen since IP has only two full-time employees (that doesn't include me; I work full-time at Microsoft). Having such a small staff means that we're not always able to do things the way we want, but the event sold out, and we had great speakers: Iddris Sandu and Yasmine Evjen with moderator Renee Reid. A lot of companies provided sponsorships to cover the costs of the event. Our goal was to raise $15,000, and we raised over $22,000.

The event gave me the opportunity to reflect on our work after so many years. There have been a lot of difficult times. Companies have been more interested in supporting engineering / computer science / business projects with kids. They don't always see the importance of design to everything. That is slowly changing.

Q: How do you see IP growing and/or evolving?

A: Our curriculum could go to any city in the US and to many globally, but we need more support to grow since just two full-time staff people cannot keep things going in multiple locations. There's interest in Tucson, Seattle, New York, Austin, Atlanta, and some Canadian cities. We're fairly close to setting up our first new location.

Q: What can people do to help IP?

A: People can follow us on social media and share our work. They can use Amazon Smile so that we benefit every time they make a purchase. They can volunteer with us and/or get their company to partner with us. We'd be really grateful if they donated. This document from the IP staff provides links for all of that.