Operations and teaching are online. Current and prospective students: please visit our COVID-19 Updates pages. Faculty and staff are available via email.
Submitted on September 28, 2020 - 4:01pm 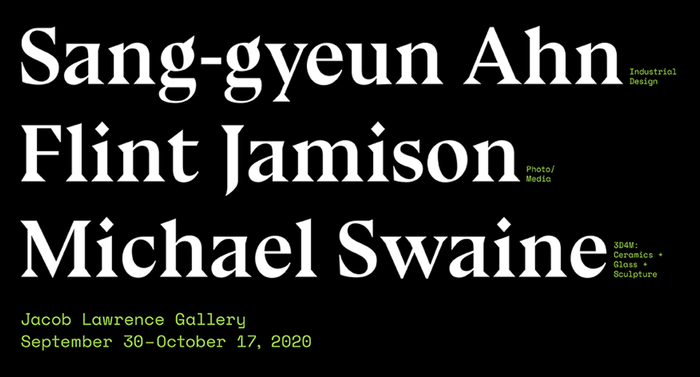 The Jacob Lawrence Gallery is pleased to present an exhibition that features work by three faculty members from the University of Washington’s School of Art + Art History + Design: Sang-gyeun Ahn, associate professor of Industrial Design; Flint Jamison, assistant professor of Photo/Media; and Michael Swaine, assistant professor of 3D4M: ceramics + glass + sculpture. While their practices span industrial design, sculpture, and publication, these faculty all use their work to ask important questions about the ways we inhabit the world.

This exhibition also marks the reopening of the gallery for in-person viewings. Visitors can attend individual, no-contact viewings by appointment Tuesdays through Saturdays. Masks are required. Learn more about the steps for visiting.

The exhibition includes industrial design models by Ahn, such as a device that measures blood glucose levels and is easy for patients to use. Ahn has worked on projects with Samsung, LG, Ricoh, The Korean Institute of Design Promotion, and Propane Design Group prior to joining the UW Design faculty in 2006. He has won numerous international design competitions, including Grand Prize in the 2001 International Bicycle Design Competition, a Luminary Award in the 2005 Red Dot Design Competition, and an Honorable Mention in the 1998 LG Design Competition. Since 2014, Ahn has been helping entrepreneurs commercialize their inventions at UW, which led to endorsements of three U.S. patents and the release of several medical products in the mass production market.

Jamison presents a selection of sculptural works produced between 2017 and 2020. He has exhibited previously at the Whitney Biennial, Liverpool Biennial, and Rennes Biennial, and he is editor of the serial publication Veneer Magazine. He co-founded Department of Safety, an arts center in Anacortes, Washington, and also co-founded and is the President of the Board of Directors of the contemporary art center Yale Union in Portland, Oregon. This summer, Yale Union announced the transfer of its $5M+ property assets to the Indigenous-led organization Native Arts and Cultures Foundation.

Swaine exhibits sculptural work, including Oar Trade, in which floorboards harvested from a Baltimore rowhouse in the shape of an oar were exchanged with floorboards in Seattle. Realized in the spirit of Allan Kaprow’s Trading Dirt from the 1980s, this project will continue to exchange oars into the future. Since 1997, Swaine has been a core member of the collective Futurefarmers, whose multidisciplinary members share an interest in creating experiences of "not knowing.” Futurefarmers has held exhibitions at SFMOMA, Guggenheim Museum in NYC, Walker Center for the Arts, and Site Santa Fe. Within the collective, Swaine is known for his use of analog tools and materials that reveal hidden histories and meanings. His Free Mending Library Project involved a treadle-operated sewing machine mounted on an old-fashioned cart that he pushed through the streets of San Francisco’s Tenderloin neighborhood monthly from 2002–2015 and continues today. The project was recognized by Gavin Newsom, then Mayor of San Francisco, and also received a Jefferson Award. He is currently a recipient of the 2020–2021 UW Mellon Faculty Fellow in the Arts for a new project entitled Reverse 20 Questions – Double Blind.