Voices+Voids: Reclaiming and Transcoding Our Data as Performance

Operations and teaching are online. Current and prospective students: please visit our COVID-19 Updates pages. Faculty and staff are available via email.
Submitted on November 3, 2020 - 12:37pm 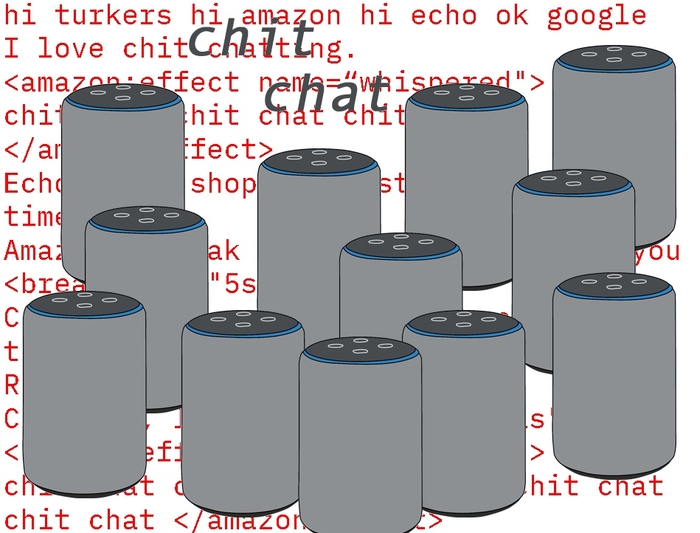 As voice assistants like Alexa and Siri become nearly ubiquitous, artificial intelligence (AI) and machine learning (ML) technologies are increasingly integrated in our lives, listening to our private conversations, and responding to our queries with automated replies. What does it mean that we’ve become familiar with these non-human interactions? What is the labor that goes into creating and supporting them? What are their limitations?

Voices and Voids responds to these questions and contradictions through a series of interdisciplinary, virtual performances and vignettes that challenge AI and ML technologies and consider the ways in which they corroborate the impact of Late Capitalism and the Anthropocene. The research project, which began in 2019 and continues through December, seeks to reclaim and ultimately transcode voice interaction data through embodied experiments that combine design, data-driven art, cyber crafts, found-object and traditional percussion instruments, spoken word, and movement.

As they began sharing publicly their Voices and Voids research and explorations, University of Washington Assistant Professors Audrey Desjardins, Afroditi Psarra, and Bonnie Whiting came together on November 20 for a Zoom conversation moderated by Jacob Lawrence Gallery Director + Curator Emily Zimmerman. Desjardins, Psarra, and Whiting created Voices and Voids and are leading the project, which also features contributions from a dozen additional artists in residence and collaborators.

Voices and Voids is made possible with funding from the Mellon Foundation and the University of Washington College of Arts & Sciences.

Watch a video of this event on Seattle Channel.

Desjardins is a design researcher, an assistant professor in Interaction Design, and graduate program chair of the Master of Design program at the University of Washington. In her work, she uses design concepts and prototypes to question and reconsider familiar encounters between humans and things. She has spent the last several years using design as an approach to examine and critique current Internet of Things (IoT) technologies, which are too often grounded in homogeneous and detached views of the home. Desjardins’ current projects touch on ways to explore and reclaim IoT data by crafting and materializing ways of living with that data. Her work has been supported by the National Science Foundation, the Mellon Foundation, and Mozilla, and it has been presented at academic conferences in the fields of human-computer interactions as well as design such as ACM CHI, ACM Designing Interactive Systems, Research Through Design, and ISEA.

Psarra is a transdisciplinary artist and an assistant professor of Digital Arts and Experimental Media (DXARTS) at the University of Washington. Her artistic interest focuses on use of the body as an interface of control and resistance, and the revitalization of tradition as a methodology for hacking existing norms about technical objects. She uses cyber crafts and other gendered practices as speculative strings and open-source technologies as educational models for diffusing knowledge. Her work has been presented at international media art festivals such as Ars Electronica in Linz, Transmediale and CTM in Berlin, ISEA in Montreal, Eyeo in Minneapolis, Amber in Istanbul, Piksel in Bergen, CyborGrrrls in Mexico City, Videobrasil in Sao Paolo, and WRO Media Arts Biennale in Poland. It has also been published at various international conferences, including Siggraph, International Symposium of Wearable Computers, and Electronic Visualization and the Arts. Her work has been supported by the Bergstrom Award in Art and Science and the Mellon Foundation, in addition to numerous residencies. In 2021, Psarra will be an artist in residence at the Instrument Inventors Initiative in The Hague, Netherlands.

Whiting is chair of Percussion Studies and an assistant professor of Music at the University of Washington. She performs new experimental music, seeking out projects that involve the speaking percussionist, improvisation, and non-traditional notation. Recent work includes performances at the John Cage Centennial Festival in Washington, DC, solo appearances with the National Orchestra of Turkmenistan, and performances on the original Harry Partch instrumentarium. Her debut solo album, featuring an original solo-simultaneous realization of John Cage’s 45’ for a speaker and 27’10.554” for a percussionist, was released by Mode Records in April of 2017. Her second album, Perishable Structures debuted in 2020, placing works for speaking percussionist within a context of storytelling. In 2021, Whiting will premiere Through the Eyes(s), an extractable cycle of nine pieces for speaking/singing percussionist developed in collaboration with composer Eliza Brown and nine incarcerated women. Whiting has presented solo and small ensemble shows across the US and internationally, and performed with some of the country’s leading new music groups, including Ensemble Dal Niente, the International Contemporary Ensemble, and red fish blue fish percussion group.