Operations and teaching are online. Current and prospective students: please visit our COVID-19 Updates pages. Faculty and staff are available via email.
Submitted on April 10, 2021 - 11:24am 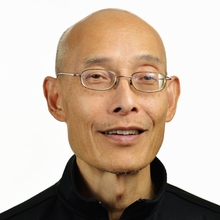 This online celebratory gathering will take place via Zoom. The link will be provided in the registration confirmation email.

Several speakers are participating, including artist and alum Barbara Earl Thomas in conversation with Ron Chew.

Ron Chew is a lifelong Seattleite. He is a graduate of the University of Washington, majoring in editorial journalism. He served as executive director of the Wing Luke Asian Museum from 1991–2007, spearheading a $23 million capital campaign to build the new museum. Prior to his career at the museum, he worked for over 13 years as editor of the International Examiner, an acclaimed newspaper in Seattle’s Chinatown-International District. He later served on the Seattle Public Library Foundation Board during the city-wide “Libraries for All” capital campaign, completed in 2008. From 2010–2020, Chew served as executive director of the ICHS Foundation, helping raise money to support a network of community clinics serving Asian Pacific American immigrants and refugees as well as other underserved populations. He is a founding member of the Seattle Chapters of the Asian American Journalists Association and Asian Americans / Pacific Islanders in Philanthropy. He also serves on the board of directors of the International Examiner and the board of trustees of the Seattle Public Library. Chew is currently working on freelance fundraising writing projects. He is also producing an audiobook version of his memoir, My Unforgotten Seattle, with the assistance of the Washington State Talking Book and Braille Library.

The Anne Focke Arts Leadership Award is a community-based biennial award offered by the University of Washington School of Art + Art History + Design. As the region’s leading research institution, we are privileged to acknowledge and honor individuals in the fields of art, art history, and design for their exceptional vision, leadership, and innovation.

Named for Anne Focke, an alum­ who exemplifies the traits in the award description, it is a non-cash honor organized by the School’s Advisory Board and other community leaders. The Anne Focke Arts Leadership Award was originally hosted by 911 Media Arts. 2017 was the first year the award was offered by the School, signifying our commitment to preparing students for both professional and leadership roles. In addition to Focke, past recipients of the award include Richard Andrews, Helen Gurvich, Ed Marquand, Beth Sellars, and Steve Kaneko.

Anne Focke was one of the first art history graduates from the School, as well as its inaugural Alum-in-Resident. Her career parallels the history of the arts, both nationally and here in our local community. Focke is both a creator of and a collaborator on many non-profit, for-profit, and informal enterprises and exchanges, including: Jini Dellaccio Project, Common Field Council, Grantmakers in the Arts, Community Democracy Workshop, Arts Wire, Artist Trust, Artech, and the gallery and/or. Her legacy looms large in the City of Seattle, where she was instrumental in creating the Seattle Arts Commission (now the Office of Arts and Culture), as well as the Art in Public Places program. The eponymous gallery in City Hall is named for Focke and celebrates her contributions to Seattle.