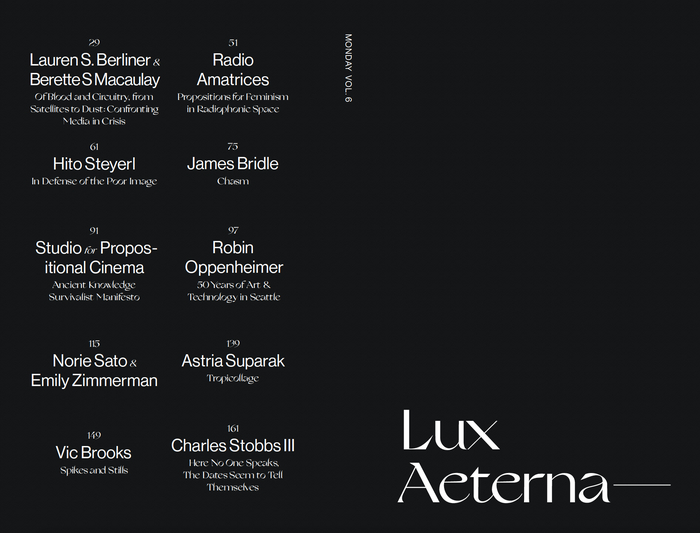 The sixth volume of MONDAY, the Jacob Lawrence Gallery’s arts journal, will debut February 3, 2022. Titled “Lux Aeterna,” the new volume extends the themes and inquiries of the gallery’s 2021 exhibition of the same name, which considered how technological, economic, and cultural forces shape the ways we produce, share, and experience media — and how that media in turn influences our values and aesthetics.

The “Lux Aeterna” issue brings together several texts that formed the foundation of the Lux Aeterna exhibition — including pieces by German filmmaker and cultural critic Hito Steyerl and British artist and writer James Bridle — alongside new writing that builds on related ideas. The “Lux Aeterna” issue features a visual essay by Astria Suparak related to her ongoing project Asian futures, without Asians, an interview with Pacific Northwest media art pioneer Norie Sato, a conversation between University of Washington professor Lauren Berliner and multidisciplinary artist and curator Berette S Macaulay about the Lux Aeterna exhibition, and writing by Radio Amatrices, Robin Oppenheimer, and others. This volume of MONDAY was edited by Emily Zimmerman, Director + Curator of the Jacob Lawrence Gallery and Founding Editor of MONDAY.

“The issue extends the expansive questions the artists were asking in Lux Aeterna about the status of image technologies and their impact in this time of accelerated change,” Zimmerman says. “It also places those questions in dialogue with a rarely told account of media art in the Pacific Northwest.”

A launch event on Thursday, February 3 at Northwest Film Forum will celebrate the publication’s release. The event will also feature a 7pm (PST) screening of Martine Syms’ Incense Sweaters & Ice, a feature film inspired by the idea that anything one does while being watched is a performance. Syms’ film, produced at the Experimental Media & Performing Art Center (EMPAC) and starring multidisciplinary artist Katherine Simoné Reynolds, is also the subject of an essay in the new issue of MONDAY by curator and filmmaker Vic Brooks.

Published by the Jacob Lawrence Gallery at the University of Washington, MONDAY presents arts writing that invites readers to imagine future forms of criticism. In a range of accessible and rigorous forms, its contributors have in common an expansive approach to their writing. Their subjects  extend from fine arts to all manner of cultural expression, reminding us that approaches to cultural criticism can be as heterogeneous as the themes they address. Each year, one of MONDAY’s biannual print publications is created under the editorial guidance of the Jacob Lawrence Legacy Resident.