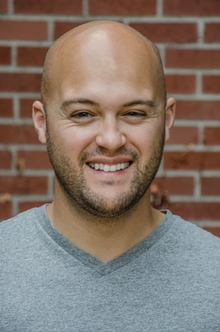 It is not uncommon today for people ten-plus years older than the average college student to return to school seeking a degree. Here is a look at three current School of Art students who fit that profile: Sam Cook, a BDes student in the Interaction Design Program; Dana Garvey, a PhD candidate in Art History; and, Dave Kennedy, an MFA student in the Photomedia Program.

Sam Cook entered Oregon State University (OSU) as an undergraduate straight out of high school. For personal reasons, he left college and moved to the East Coast. He moved back to Seattle eventually to be closer to family. Since leaving OSU, Cook has worked a variety of jobs including being head lifeguard at a waterslide park for a couple years and selling new Volkswagens for another couple years. Most recently, he spent five years as a pharmacy technician and started doing freelance photography work. Cook also attended school off and on at both Northern Virginia Community College and North Seattle Community College.

Cook decided to complete his bachelor’s degree when he realized he craved a career that would be more mentally stimulating and rewarding. He chose the School of Art because of its Design Programs. Cook says “Design initially appealed to me for the same reasons I love photography: you have to master some complex but powerful tools while also having a well developed sense of aesthetics and composition. Interaction Design offers that dynamic and some really challenging thinking about systems and people.” After graduation, Cook plans to find a thought-provoking job in the Seattle area using his interaction design skills and also travel a bit. Some of Cook’s recent work can be seen on his website .

Dana Garvey originally received a bachelor’s degree in management and finance at Loyola University in New Orleans, following that with a law degree. While pursuing those degrees, she also worked at a regional telecommunications carrier doing a wide variety of jobs, from searching for lost inventory to helping draft complex FCC applications. She successfully targeted a cellular telephone startup company in San Francisco as an employer after graduation. The company grew to be a major force in the industry, and Garvey’s career grew to the point that she was a senior manager. Eventually, she started a telecommunications project management firm since one of her strongest interests was building teams to solve difficult problems.

Despite her career success, Garvey wanted to stay true to a promise she had made herself years before: to someday study art history. By the time her son was born, she was living in Seattle, and it was a good time for a change. The School of Art seemed the obvious choice for Garvey to pursue her interests. She started out as a post-baccalaureate student, earned a BA, then an MA, and is now writing a dissertation for her PhD. She says she has “concentrated in 19th-century British and American painting. The 19th-century is endlessly intriguing, just out of reach but startlingly familiar. Because of the strong emphasis on classical learning and intense interest in archaeology, religion, technology and the sciences, through the lens of the 19th century you can reach forward or backward to explore a different period, to construct an argument or to expand perspective.” Garvey loves research and can see herself continuing to pursue it after graduation, but she also knows that it is possible her technology background may come into play as the field of art history makes more use of technology over time.

Dave Kennedy received his bachelor’s degree in visual communication from Western Washington University in Bellingham. He moved to Seattle after graduation and became a production artist, working as a photographer, design director, graphic designer, and director of photography and image branding. Through collaborations with other professionals, Kennedy has completed projects with Adobe, AT&T, Boeing, DDB, Hasbro, IBM, Microsoft, Rhapsody, and the University of Washington. He also established himself as a freelance photographer in 2004, and he became a part-time instructor at Photographic Center Northwest in 2010.

The teaching is what inspired Kennedy to pursue an MFA degree focusing on photography and video. His ultimate goal is to teach part-time at the university level as well as continue studio practice. Kennedy says, “My interests are centered around the narrative. Re-contextualizing occurrences into allegories and personifications, I use an alchemist approach, transforming dreams, intimate conversations, objects and things into the affecting. Within each narrative, I’m interested in using iconography to create a representation that stands somewhere between reality and illusion.” With an already broad skillset in photography, filmmaking, lighting, design, and design production, graduate school is helping Kennedy further synthesize his artistic ideas as well as expand his teaching abilities. His work can be viewed on his website .

All three of these students see their earlier work lives as being an important element in their current pursuit of academics. Cook says that he has “found that it is easier to stay focused and invest massive amounts of time into school, compared to being fresh out of high school.” Plus, he feels that being older allows him to relate to professors in a different way than when he was younger. Garvey says that being a returning student “has made me a more passionate student and given me confidence to challenge accepted ideas and interpretations. I think that’s true for most people who go back to school after working for a few years; they really want to be there.” Her business and legal background make her “want to drill down to the evidence and step-by-step reasoning that inform a point of view, theory, or critical debate and consider them from as many angles as I can.” Kennedy says that graduate school “requires a good amount of collaboration and coordination. Both are skills I learned outside of academia that I use on a regular basis while attending school.” He also enjoys the diversity of backgrounds found among the graduate students, saying this “makes for an exciting process and interesting learning environment.”

Most older students, whether undergraduate or graduate, bring a sense of commitment to their studies sometimes absent in younger students. More importantly, they bring a wealth of experience that benefits them, as well as their fellow students and the campus community, while pursuing their enthusiasm for education and their chosen field.