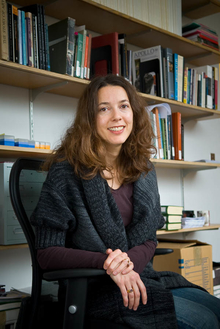 Art History Professor Estelle Lingo, holder of a Donald E. Petersen Endowed Fellowship, has been selected for two prestigious visiting professor positions. During spring 2016, she is a Robert Lehman Visiting Professor at Villa I Tatti in Florence, Italy. This is The Harvard University Center for Italian Renaissance Studies, and it houses a world-famous research library. Lingo will be working on the completion of her second book, Mochi’s Edge and Bernini’s Baroque, as well as overseeing new photography for the book. She will attend the presentations by other appointees and discussions of their research. Lingo will present her own work on April 28 in a lecture titled “Sculpture’s Shame: Medium, Style, and History at the End of the Renaissance.” She previously held a fellowship at Villa I Tatti in 2006-2007.

Later in 2016, Lingo will become the Andrew W. Mellon Professor at the Center for Advanced Study in the Visual Arts (CASVA), which is part of the National Gallery of Art in Washington, DC. This is a two-year position, the longest offered by CASVA, and it is possibly the most significant award that a mid-career art historian can receive. She joins a distinguished list of former recipients, and she is the first scholar from the western United States to be appointed. While there, Lingo will oversee the editing and production of her book mentioned above. She will also be able “to move ahead rapidly with a new book project on developments in eighteenth-century Italian painting for which the National Gallery’s collections and library offer the ideal resources. The study proposes to reconsider major artistic figures and genres associated with the Grand Tour from the Italian perspective, in contrast to prevailing accounts which focus upon the role of tourists’ tastes in reshaping the era’s visual production.”