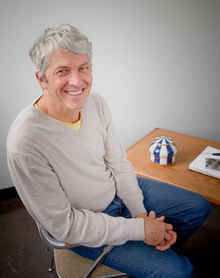 While the long nights, inclement weather, and state of the world could rightly challenge anyone’s enthusiasm for this winter quarter, I remind myself how fortunate we are to be engaged in the teaching, research, and creation of the arts — a drive and passion that seeks to understand, communicate, and expand creative thinking and practice. The UW is one of the few universities that still teaches within a quarter system, a scheduling pattern that has its pros and cons, and a system that demands an intensely focused ten-week commitment leading up to the joys of finals. Given the added stimulation of national and world events, the holiday break was perhaps even more welcome than usual this year. The vacation allowed us all the time to reflect on our personal and shared experiences in the classrooms and studios while recognizing the challenges of the times in which we live.

The end of the year brought a few changes to the School. Following the departure of Scott Lawrimore to Hawaii, we eagerly anticipate welcoming Emily Zimmerman as the next Director of the Jacob Lawrence Gallery, effective January 16. Many of us know Emily from her excellent work as Associate Curator of Programs at the Henry Art Gallery. This is a particularly salient time for the Jake as it marks the 100th anniversary of Jacob Lawrence’s birth, and his work will be featured at multiple venues throughout Seattle including performances and exhibitions at the Meany Center for the Performing Arts, the Henry Art Gallery, and, of course, the Jacob Lawrence Gallery. Considered one of America’s most important painters of the 20th century, Jacob Lawrence moved from New York to teach at the UW School of Art in 1971, retired in 1985, and continued to paint until his death in 2000. His epic 60-panel work, The Migration Series, will be exhibited at the Seattle Art Museum. As part of the ongoing series of exhibitions under the umbrella of Utopia Neighborhood Club, the Jake will be exhibiting a prime selection of Lawrence’s work from the UW Campus Art collection, including The Legends of John Brown on loan from the Washington Arts Commission, in February along with additional selections from the Francine Seders collection and the School of Art + Art History + Design.

The holiday break is also the time when many faculty are busy writing letters of recommendation for current and former students who are applying to graduate school or teaching positions. We are looking forward to hiring new faculty in our Interdisciplinary Visual Arts program along with the inaugural Kollar Endowed Chair of American Art. For the first time, a challenge grant was offered to the School by an anonymous donor, a challenge that was generously matched by some fifty additional donors, raising $200,000 in graduate support that will be critical in attracting promising graduate students to the School. The ability to combine the support we receive from the College of Arts & Sciences with public, alumni, friend, foundation, and corporate gifts is what elevates the School to be extra ordinary.

Winter also coincides with our annual Critical Issues in Contemporary Art Practice lecture series, which, thanks to crucial support from the Boeing Company, is free and open to the public. The lecture series takes place on seven Thursday evenings during the quarter at the Henry Art Gallery auditorium. A stellar lineup of distinguished guests have been invited by Assistant Professor Aaron Flint Jamison in his first rendition of teaching the accompanying interdisciplinary class.

On the first day of Winter quarter 2017, I walked past the open door of a crowded classroom on the third floor of the Art Building. I could hear an animated voice make a point and suddenly the students burst out laughing. The joy and chemistry of good teaching was evident, and I smiled when I recognized that the voice belonged to Audrey Desjardins, Assistant Professor of Interaction Design, teaching her first-ever class at the UW. I look forward to many more such moments as the year unfolds.