Operations and teaching are online. Current and prospective students: please visit our COVID-19 Updates pages. Faculty and staff are available via email.
Submitted on September 10, 2018 - 1:40pm 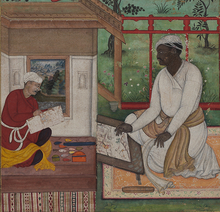 A symposium hosted by the UW South Asia Center and organized by Art History Associate Professor Sonal Khullar in conjunction with the Seattle Art Museum special exhibition Peacock in the Desert: The Royal Arts of Jodhpur, India. Co-sponsors are the Division of Art History in the School of Art + Art History + Design, the Simpson Center for the Humanities, the School of Music, and the Gardner Center for Asian Art and Ideas at the Seattle Art Museum.

This symposium focuses on Indian painting in Mewar and Marwar, distinct areas of Rajasthan ruled by Rajputs (Hindu kings), and the Mughal empire between the sixteenth and nineteenth centuries. Speakers with expertise in painting from Mewar (Dipti Khera), Marwar (Debra Diamond), and Mughal India (Yael Rice) will discuss connections and disjunctions between Rajput and Mughal painting. They will illuminate collecting, connoisseurship, cosmopolitanism, and cultural exchange among courtly elites as well as address recent developments in the study of Indian painting, including the turn to the senses, affect, and emotion.

The symposium highlights art as performance or time-based event, subject to recitation, reiteration, revision, and reimagination. It considers South Asian historical contexts of the mehfil (gathering for musical concert or poetic recitation) and javanika (stage curtain of Indian theater) as well as concepts such as jugalbandi (musical duet) and jugaad (workaround, innovative fix, improvisation, bricolage) with the artist functioning as a sutradhar (narrator, storyteller, performer, stage manager) or "picture showman," to use Ananda K. Coomaraswamy’s phrase.

Yael Rice (Amherst), "All the World’s a Page: Painting as Performance in Mughal India," abstract + bio

Dipti Khera (NYU), "Sensing Pleasures: The Place and the Effect of Moods in Paintings from Mewar," abstract + bio

"Since Nowruz [the Persian New Year] was near, [the painting] was made in haste." This statement appears on a now-famous early seventeenth-century manuscript painting of the Mughal emperor Jahangir embracing the Safavid ruler Shah 'Abbas, which, as close examination reveals, would have taken the artist Abu’l Hasan many, many months to complete. The expectation that one could perform such extraordinary feats as producing a masterpiece in a jiffy—or, as others boasted, depicting a whole composition on a poppy seed—was an integral part of being a royal artist at this time. Painters, like poets and musicians, performed their craft. Patrons and the other users of these materials responded in kind, sometimes adding their own rejoinders to the margins of the illustrated page. This talk will consider the performative dimensions of Mughal painting during the sixteenth and seventeenth centuries, focusing in particular on how paintings punctuated royal gatherings and ritual occasions, and thus contributed to the formation of a distinctive Mughal imperial temporality.

Assistant Professor of the History of Art & Asian Languages and Civilizations, Amherst College. Rice is a specialist in the art architecture of South Asia and Greater Iran, with a particular focus on manuscripts and other portable arts of the fifteenth through eighteenth centuries. She received her PhD from the University of Pennsylvania in 2011. Between 2009–12, she was Assistant Curator of Indian and Himalayan Art at the Philadelphia Museum of Art, where she curated exhibitions of court portraits from South Asia, ragamala paintings, and works by Rabindranath Tagore and other twentieth-century artists. Her research has been supported by a Five College Mellon Postdoctoral Fellowship in Islamic Art (2012–13), a Rare Book School Mellon Fellowship in Critical Bibliography (2013-15), and a Samuel H. Kress Foundation Travel Fellowship (2006). She is completing a book manuscript, The Object of the Image: Artists, Books, and Empire in Mughal India, which examines Mughal painting through new lenses, including imperial dreams, visions, and magic; the agency of artists in the kitabkhana or imperial workshop; and material and object encounters across the globe during the early modern period.

During the second half of the eighteenth century, as Mughal political and cultural authority diminished, regional relationships and transegional practices of devotion to Rama and Krishna transformed court culture in Marwar. In the royal atelier, painters turned from producing relatively small portraits to creating unbound manuscripts with folios of monumental scale. This shift from intimate to grand invited a sort of visual jugaad — artistic improvisations and innovations that exploited the narrative and emotional possibilities of expanded scale. Maharaja Vijai Singh (1752-1793), an initiate of the Vallabha tradition of devotion to Krishna, was the patron of the atelier’s earliest large manuscripts, the Krishna Charit (Raslila) and the Ramcharitmanas. Both emerge from inter-related bhakti (devotional) traditions connected to re-enactment and performance. The substantial growth of the painting atelier in relation to the maharaja's admission into a cohort of royal devotee-patrons, his passion for bhakti poetry, and an expanded format for paintings that allowed for collective viewing, invite a reimagining of the contexts and reception of Jodhpur painting in the eighteenth century.

Curator of South and Southeast Asian Art, Freer Gallery of Art and Arthur M. Sackler Gallery (Smithsonian Institution). Diamond received her PhD in South Asian art history from Columbia University (2000) and has published numerous articles on Indian and contemporary Asian art. A specialist in Indian court painting, She curated Garden and Cosmos: The Royal Paintings of Jodhpur, which opened at the Arthur M. Sackler Gallery on October 11, 2008. The exhibition then traveled to the Seattle Asian Art Museum, the British Museum, and the Art Gallery of New South Wales. Diamond has curated numerous exhibitions at the Sackler Gallery, including Facing East: Portraits from Asia (2006), Perspectives: Simryn Gill (2006), Autofocus: Raghubir Singh’s Way into India (2003), Worlds Within Worlds: Imperial Paintings from India and Iran (2012), and Yoga: The Art of Transformation (2013). In 2010, she received the Smithsonian Secretary’s Research Prize for the Garden and Cosmos: The Royal Paintings of Jodhpur exhibition catalogue.

The art of sensing moods mattered in the courts of South Asia. The eighteenth-century painters of Mewar suggest that the bhava, moods and emotions, of pleasure and prosperity mattered even more. The moods of grand-scale paintings, larger in size than earlier, smaller manuscripts and portraits, which could be held in a single hand, emerged in the enchanting depictions of lime-washed palaces overlooking the lakes of the capital city of Udaipur, populated by the collectives of kings and connoisseurs. Painters, like poets and intellectuals, viewed the moods of real places as open to adaptation, admiration, and assimilation. In iterating idealized and ephemeral atmospheres of the city’s lands and lakes, seen for instance in the pictorial and painterly unfolding of the seasons of monsoon and spring, painters merged the real and ideal. In turn, paintings are revealed less as documents, more as effective means of recalling the moods of historical times, the longing for ideal times, and the bonding of urbane men in desires and delights.

Assistant Professor of South Asian Art, Department of Art History and Institute of Fine Arts, New York University. Khera earned her PhD in Art History and her MA in Museum Anthropology from Columbia University. She is presently writing a book and developing an exhibition with the Arthur M. Freer and Sackler Galleries, Washington, DC, and the City Palace Museum, Udaipur (Mewar, Rajasthan) that reveal the major shift in Indian art represented by Udaipur painters’ engagement with conceptualizing place, representing reality, and imagining territoriality. Along with specializing in premodern and early modern South Asian architecture and Indian painting, Khera has pursued research interests in nineteenth century design, modern architecture, and contemporary heritage landscapes in order to understand the longer history of cross- cultural exchanges in the visual, material, and built worlds of the subcontinent.

Parijat Jha, a master's student in South Asia Studies, wrote a short article about the symposium after the event. Included in the article is a video documenting the presentations and discussion.