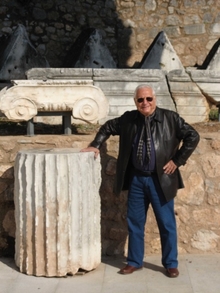 The School of Art + Art History + Design is sad to announce the passing of Art History Professor Emeritus Constantine Christofides on June 24, 2020. He died in New York City, his home for the last decade, from natural causes at the age of 92.

Dr. Christofides played a significant role in several areas at the University of Washington. He arrived here in 1965 as chair and professor of the Department of Romance Languages and Literature. He stepped down as chair in 1972 then later served as acting chair of the Department of Comparative Literature and as an associate dean in the College of Arts & Sciences.

While Dr. Christofides taught Romanesque art history classes as early as the late 1960s, he did not become a professor of Art History until the 1970s. He served as chair of Art History from 1979 to 1984 then he was director of the School of Art from 1986 to 1992.

As I write from the office that Chris once occupied as director, I recall first meeting him as part of my job interview to join the faculty. Always a consummate conversationalist, he soothed my nerves, talked about the wonders of France, showed me a few of his photographs, and shared his confidence in my future. His passionate curiosity, willingness to take on new challenges, and diplomatic skills were truly inspirational, and the School benefitted tremendously from his presence as a professor and director.

Professor Emerita Anna Kartsonis became an Art History colleague when she arrived at the UW in 1983. She then developed a close friendship with Dr. Christofides and his wife, Koren. This is her remembrance:

It is difficult to encapsulate briefly and justly Constantine Christofides’ larger than life presence in this world which was, at the same time, both discrete and measured. Chris was a man of the world who lived his life fully in every way. The character of his journey echoes Constantine Cavafy’s great poem Ithaca in its long and fruitful sojourn from Alexandria to Seattle, Istanbul, Athens, Crete, Provence, and New York, most of which he savored for many years together with Koren — talented artist and beloved wife. Chris knew beauty and pursued it intellectually through literature (French, Greek) as well as through Medieval Art (French and Spanish). What is more, he also practiced it as an exceptional photographer. He shared his knowledge and his passion for these broad fields with many students, both at the University of Washington and in France, with great success as a teacher. He was similarly a thoughtful, judicious, and generous guide in his many administrative roles at the University of Washington. Both as teacher and administrator, Chris proved to be an enlightened mentor who used his knowledge, experience, know-how, and charisma to support students, faculty, and staff to explore and further their individual and collective potential. Last, but not least, Chris was endowed with the capacity of true friendship in good and bad times. In other words, Chris — Constantine Christofides — was an exceptional, charismatic, generous human being in the ways that matter most.

Dr. Christofides was instrumental in launching the study abroad program at the University of Washington in 1968. In 2008, he, his wife, friends, and colleagues contributed to create the Constantine Christofides Endowment for Study Abroad, which supports study abroad students and programs in the School of Art + Art History + Design. The endowment reflects his belief that "immersion in another culture, its values and its language, helps one make sense of the complexities of other cultures and human nature in general."

His family has shared that his wish was for memorial contributions to be made to this endowment. Donations may be made online or by sending a check to Constantine Christofides Endowment for Study Abroad, School of Art + Art History + Design, University of Washington, Box 353440, Seattle, WA 98195-3440.

Learn more about the many accomplishments of Professor Emeritus Christofides in his Seattle Times obituary.