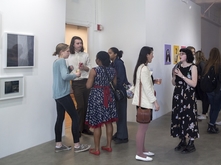 Each year we celebrate graduating Art and Design undergraduate and graduate students with a series of exhibitions in the Jacob Lawrence Gallery and Henry Art Gallery. Join us for one or more of these in April, May, and June. Read more 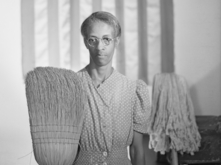 Hosted by the Division of Art History on April 26, this lecture is titled "Iconic Encounter: Gordon Parks and Ella Watson in 1942." It is free and open to the public, but please RSVP to save a seat. Read more 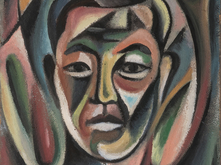 Cascadia Art Museum is showing Northwest Design at Mid-Century through Mar 25, 2018. One-third of the artists and designers selected for the exhibition are School faculty and/or alums. Read more

Two events start off spring quarter in the Gallery:

March 29 is the evening that kicks off this year's Strange Coupling. There will be an auction and the announcement of the student / artist pairings. Learn more.

Professor and School Director Jamie Walker is on a panel titled "Ceramics and Celluloid" at the NCECA Conference in Pittsburgh during mid-March.

IVA Senior Lecturer Timea Tihanyi and her Slip Rabbit Studio have work in Art ∩ Math at CoCA through April 14. She will be a visiting artist at the Museum of Glass hot shop in Tacoma from April 11–15.

Art History Associate Professor Sonal Khullar presents a paper titled "Making Place: Contemporary Art in India" on March 27 at the Lahore Biennale in Pakistan. She is also presenting "Seeds of Change, Specters of Death: Shweta Bhattad's Faith (2016)" on April 5 at the Association for Art History's Annual Conference in London.

IVA Lecturer Dan Paz curated Thru the Roof, which is on view at The Alice in Seattle through April 14.

Art History PhD student Joshua Daugherty has had an article titled "A Reflection on the Phenomenology of Tibetan Space" published in the blog of the Journal of the History of Ideas.

Alum and current Art History graduate student Miha Sarani (BFA 2015) will have a pop up gallery of his artwork at a UW Alumni Association event on March 22 at KEXP. The speaker portraits are his work.

Shio Kusaka (BFA 2001) is having a solo exhibition at Gagosian in Rome from March 28 through May 26.

Jennifer Henneman (PhD 2016) had an article titled "In Shadow and Light—Images of Transformation Through Breast Cancer" published by the Journal of the American Medical Association in February.

George Rodriguez (MFA 2009) has a solo exhibition at the Bainbridge Island Museum of Art through June 3. His first museum exhibition was at the Rubin Center, The University of Texas at El Paso, during autumn 2017.

Anna Mlasowsky (MFA 2016) gave a lecture about her work at the Corning Museum of Glass in February. Watch the lecture in this YouTube video from the museum.