Operations and teaching are online. Current and prospective students: please visit our COVID-19 Updates pages. Faculty and staff are available via email.
Submitted on October 3, 2017 - 3:55pm 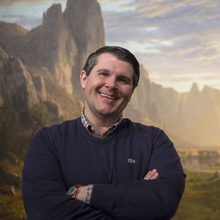 In mid-September 2017, the Board of Trustees at the Birmingham Museum of Art in Alabama named Dr. Graham C. Beottcher as the new R. Hugh Daniel Director of the museum. Boettcher received his Art History MA here at the School in 1999 under the mentorship of Professor Susan Casteras. He completed his PhD at Yale University in 2006 and joined the Birmingham Museum of Art the same year as the Henry Luce Foundation Curatorial Fellow in American Art. When the fellowship was completed in 2008, Boettcher was hired into a newly created position: William Cary Hulsey Curator of American Art. He became Chief Curator in 2014 and was then promoted to The James Milton and Sallie R. Johnson Deputy Director position in 2016. Boettcher was selected by the museum's board after a lengthy national search. We congratulate our alum on his success!