One of my favorite sayings in Italian is fretta e furia, loosely translated as being in a somewhat frenetic hurry or rush, which is exactly what spring quarter often feels like… Read more 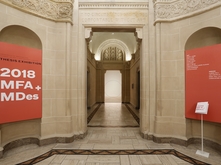 The School is pleased to announce the website that documents the work of our graduating graduate students. We are proud of their accomplishments. Nine MFA, one MA, two PhD, and four MDes graduates are included. Read more 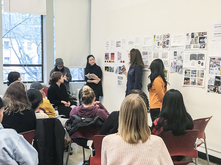 Visual Communication Design Associate Professor Kristine Matthews won the 2018 SEGD Educator Award, which was announced at the early June SEGD conference in Minneapolis. She is the first recipient of this award. Read more 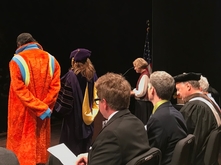 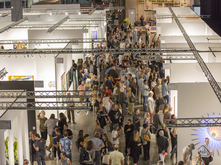 2018 Seattle Art Fair and Beyond

The School and Jacob Lawrence Gallery are once-again cultural partners of the fair. There are a number of School-affiliated people who have work being shown at the fair as well as at Seattle-area exhibitions during the fair. Read more

Two solo exhibitions will be featured during summer quarter:

Senior Lecturer Timea Tihanyi is co-recipient of the 2018–2019 Bergstrom Award for Art and Science. We will be writing more about this during the upcoming academic year; in the meantime, read a Department of Mathematics post about this award.

Two faculty members — Professor Ellen Garvens and Lecturer Kate Roberts — plus five alums will have their work presented by 4Culture during their 2018–2019 season. Read more.

The Orin Smith portrait on the cover of the June 2018 issue of Columns magazine was created by Miha Sarani (BFA 2015 + current MA student).

festival:festival returns to Seattle on August 10–11. It was co-founded by Juan Franco (MA student), mario lemafa (BFA 2013) is one of the curators, and at least two alums will be participating artists. Read more on their Kickstarter campaign page.

Katie Miller (BFA 2003) is the current artist in residence at MadArt Studio, where she is working on The Presence of Absence. The exhibition opens on July 20, but you can visit during Open Studio hours before that.

Chloe Yeo (BDes 2018) did a senior project titled "The Invisible World of Domestic Work." The infographic created from that is being used as a resource by the City of Seattle on their Domestic Workers' Bill of Rights webpage.

Double Exposure: Edward S. Curtis, Marianne Nicolson, Tracy Rector, Will Wilson is the featured exhibition this summer at Seattle Art Museum. It was curated by Barbara Brotherton (PhD 1994) with support from a Native Advisory Committee.

Nathan Vass (BFA 2009) is an artist and veteran Metro bus driver, and the two parts of his life intertwine on his website. In the last few months, he has been featured in a Seattle Channel video and a KUOW interview.

Did you know that the School now has three email mailing lists: News, Events, and Jacob Lawrence Gallery? Take a few minutes to be sure you are signed up for the ones that interest you, especially now that we have only four newsletters a year. Read more.