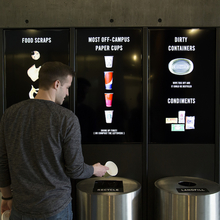 Early in 2015, Cheng and Matthews applied for a UW Royalty Research Fund Grant. They learned in June 2015 that they received full funding ($39,412). This collaborative project also involves UW faculty, staff, and students from the Master of Human-Computer Interaction and Design Program, the Department of Anthropology, the Garbology Project, Recycling and Solid Waste, as well as our Division of Design students.  The team designed and fabricated a prototype of an interactive waste system that encourages individuals to compost and recycle their trash. The system was installed in PACCAR Hall for testing during the first half of 2016. The Smart Bins were moved to Odegaard Library in August 2016.

The project was entered in the Kimberly-Clark Sustainable Campus Competition. There were 226 entries, and this project was one of three finalists. Watch their competition-related video. Cheng made a live presentation before a panel of judges on October 10 at the 2016 conference of the Association for the Advancement of Sustainability in Higher Education, which took place in Baltimore.

The Smart Bins were entered in the annual Communication Arts interactive competition. From among 985 entries, this project was selected as one of thirty-eight winners, which were featured in the March/April 2017 Interactive Annual issue.

In June 2017, Smart Bins received a Merit Award from the Society for Experiential Graphic Design (SEGD) at its conference in Miami.

Cheng is collaborating with the UW startup EvoEco to commercialize this invention.